Herd about the Elephant Parade in Singapore?

It is Elephant Parade's mission to be the world's largest financial support organization for the Asian elephant, threatened with extinction. The open air art exhibitions create worldwide attention, public awareness and support for the cause of elephant conservation: the elephant statues never go unnoticed by the wider public and mass media.

I walked around the Marina Bay area, starting at One Fullerton, Merlion Park, Esplanade, back to Merlion Park to catch a ferry (S$4) to MBS, and ended up at Marina Bay Boulevard.

The following pictures taken are a selection of elephants seen along the way.  I have also included underneath the pictures the names of the elephants, the artists and their ideas behind their paintings. 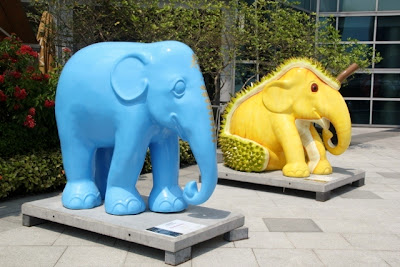 Long Life, painted by Issarapong Horathapa
"Cheers to all the animals in the world".
Delightful Durian, painted by Nat Posila and Ed Robinson
"Everyone knows Singaporeans love durian! And since we wanted to create an elephant that would touch and surprise the visitors of Elephant Parade in Singapore, a huge elephant durian is the perfect piece.  We hope this makes everyone who sees him feel our happiness in helping Asian Elephants". 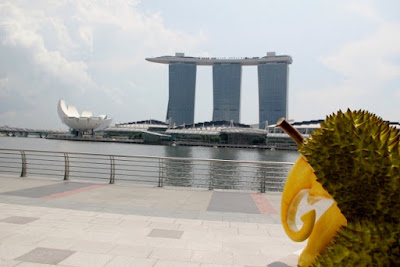 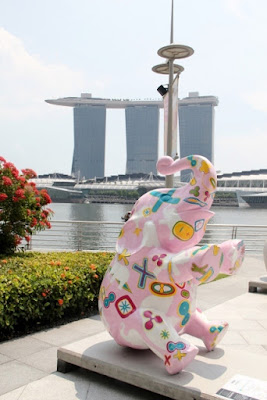 Ikon, painted by Karim Rashi
My Ikons are an alphabet, a contemporary hieroglyphic, a personal code, that I have developed over 20 years.  The symbols are non-lingual therefore not biased and anyone and everyone could interpret them as they saw fit.  The beauty of abstraction will always be self-interpretation and higher spiritual meaning.  Words are precise and forms are vague.  The Elephant Parade brings so much joy to the world and I hope the globe can understand and enjoy my Ikons and strive for my goal for a global oneness. 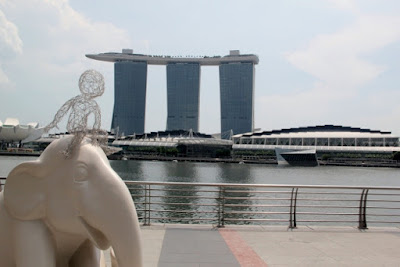 You and I, painted by Victor Tan
"With the child sitting on the elephant’s head, I want to show the relationship between human and animals/nature. We co-exist on this earth and have a close knitted relationship, sharing and facing the world together and are interdependent. I hope the future generations will continue to be able to experience and enjoy nature and animals. 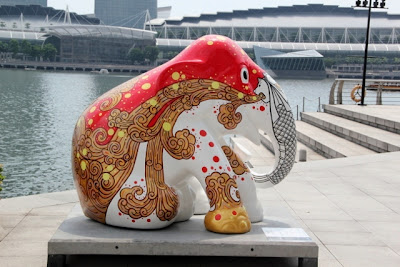 Temasek, painted by Ratchakrit Wichaiy
"The sea town that welcomes the first Elephant Parade in Asia". 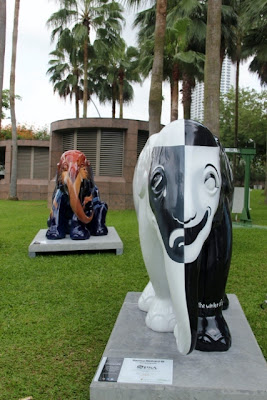 Selfness, painted by Nathaporn Potha
"Human instinct is wanting to break free from the mundane."

Saving Richard III, painted by Gaurav Kripalani
"All of us at Singapore Repertory Theatre have been consumed with the production of Shakespeare’s Richard III starring Kevin Spacey, which we are presenting here as part of The Bridge Project this year.  I wanted to use quotes from the play while drawing attention to the plight of the elephant. I thought it would be both playful and poignant to take a bit of artistic license with Richard’s line, “A horse, a horse, a kingdom for my horse”. 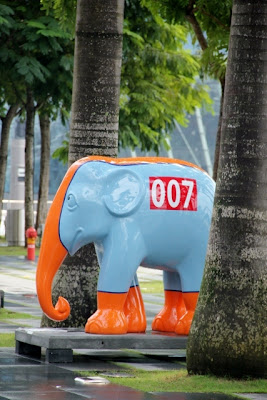 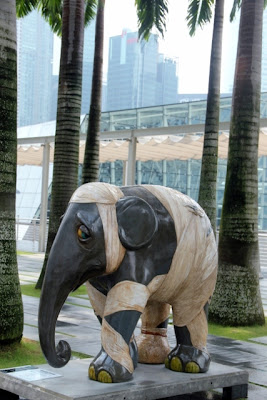 Damaged Dumbo, painted by Renato L. Barja Jr.
"After watching the current situation of elephants in a recent documentary, the inhumane acts of people towards our elephants is indeed disturbing.  Although this is the largest land animal, they are helpless in today's world.  Elephant Parade is a great channel to show my sentiments that no amount of riches can justify the killing of our beloved elephants". 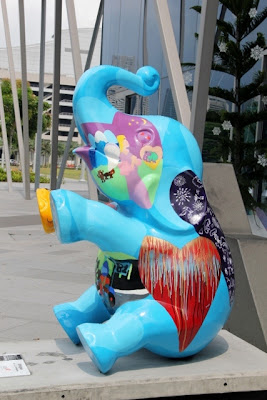 Art Angels, painted by Very Special Arts Singapore
"Eight students from Very Special Arts Singapore worked together to paint our elephant in a bid to show that, despite their disabilities, they are able to contribute to a noble cause. The story of Mosha touched their hearts, so each of them decided to paint a piece of themselves or a part of Singapore to brighten Mosha’s life. Christian, Daren, Ezra, Fern, Floyd, Kenneth, Qin Yuan and Trevor are children with autism, Down Syndrome or a hearing impairment, and their ages range from 9 to 27 years. Together they combined their efforts to bring an energetic composition to life, always keeping in mind for dear Mosha".