With Christmas just around the corner; and we had cleverly decided to take a Friday off, the email from The White Rabbit was very timely indeed.

A day off deserves a bit of a lunch treat so the Christmas Menu from The White Rabbit was really tempting. So tempting in fact, that it had to be done. A booking was made and we eagerly waited for the day to come. Making a booking was painless; a simple SMS, a reply and it was locked in.

For those that don't know The White Rabbit, it is a restaurant which is housed in a beautifully restored Chapel located in the Dempsey Hill area. Back in the 1950s, Dempsey Hill was home to the garrisons of the British Army. The Chapel served as a place of worship for the garrison.

It's quite exciting to have a meal there. When we arrived we marvelled at the restoration, the history and untold stories that surrounded us; from the stained glass to the ancient doorways. The interior was nicely decorated and felt clean, organised and pure. The minimalist concept was in full swing here, giving it a modern non-cluttered chic.

We took the time to look around whilst we nibbled on some warm Bread. 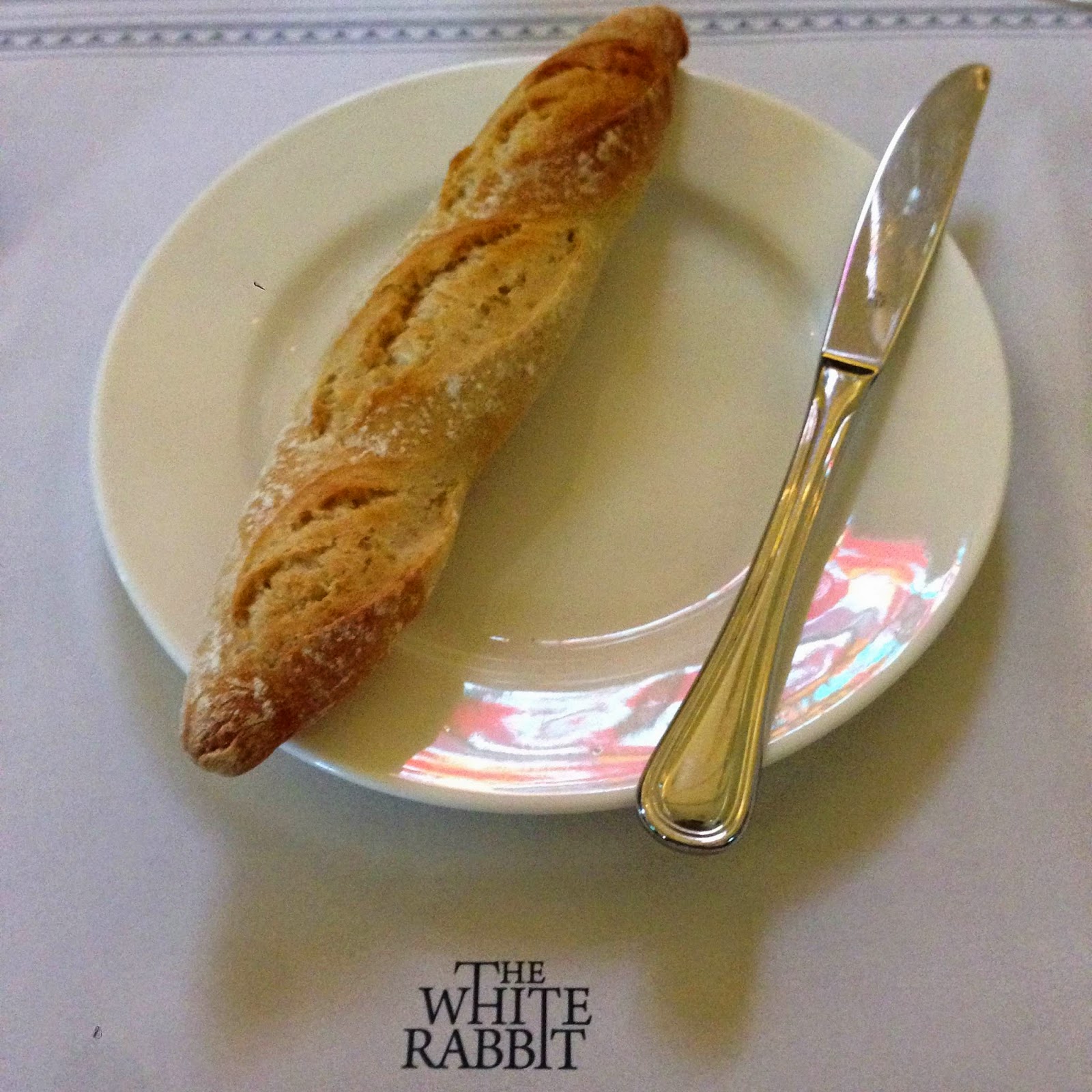 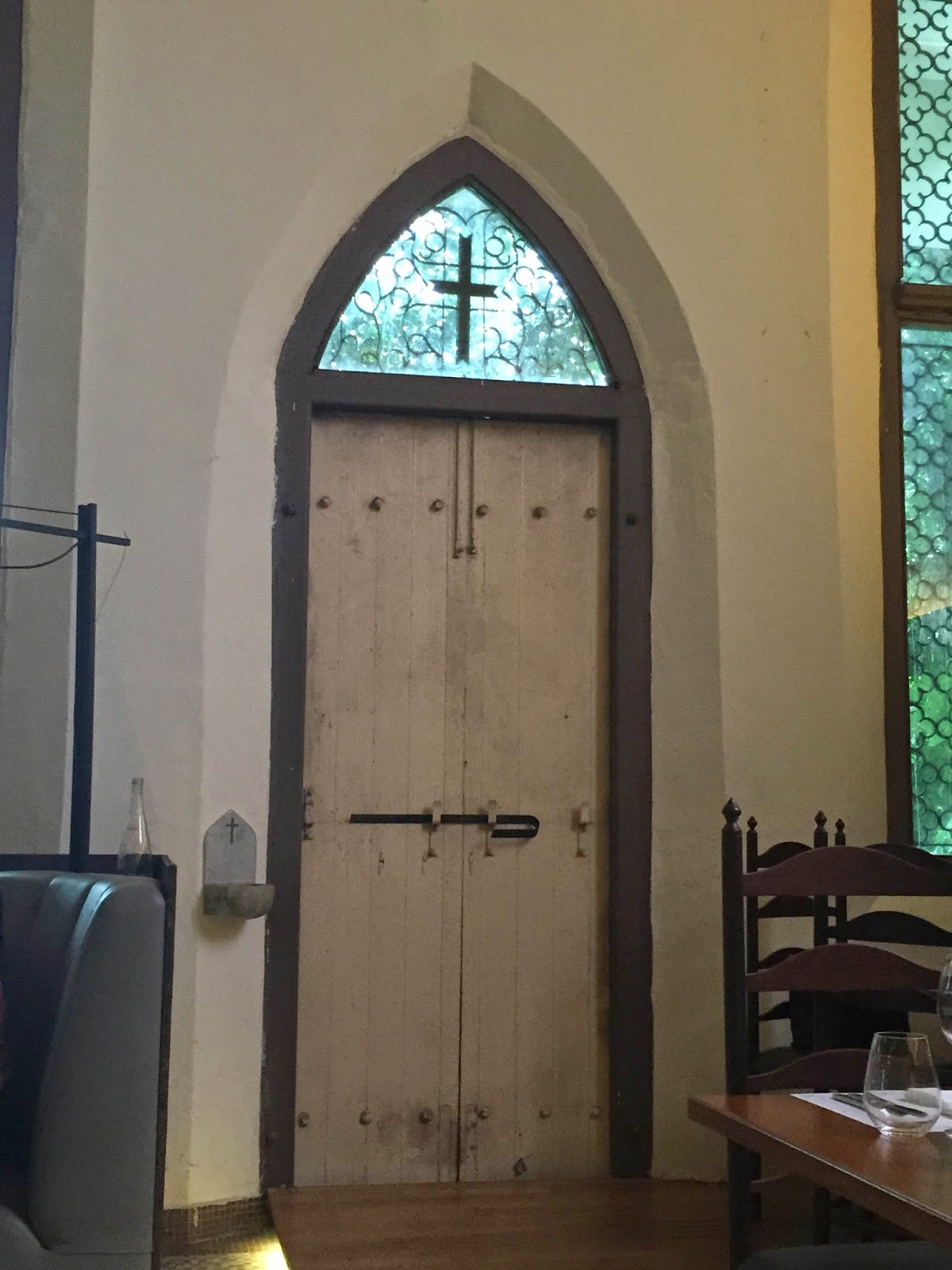 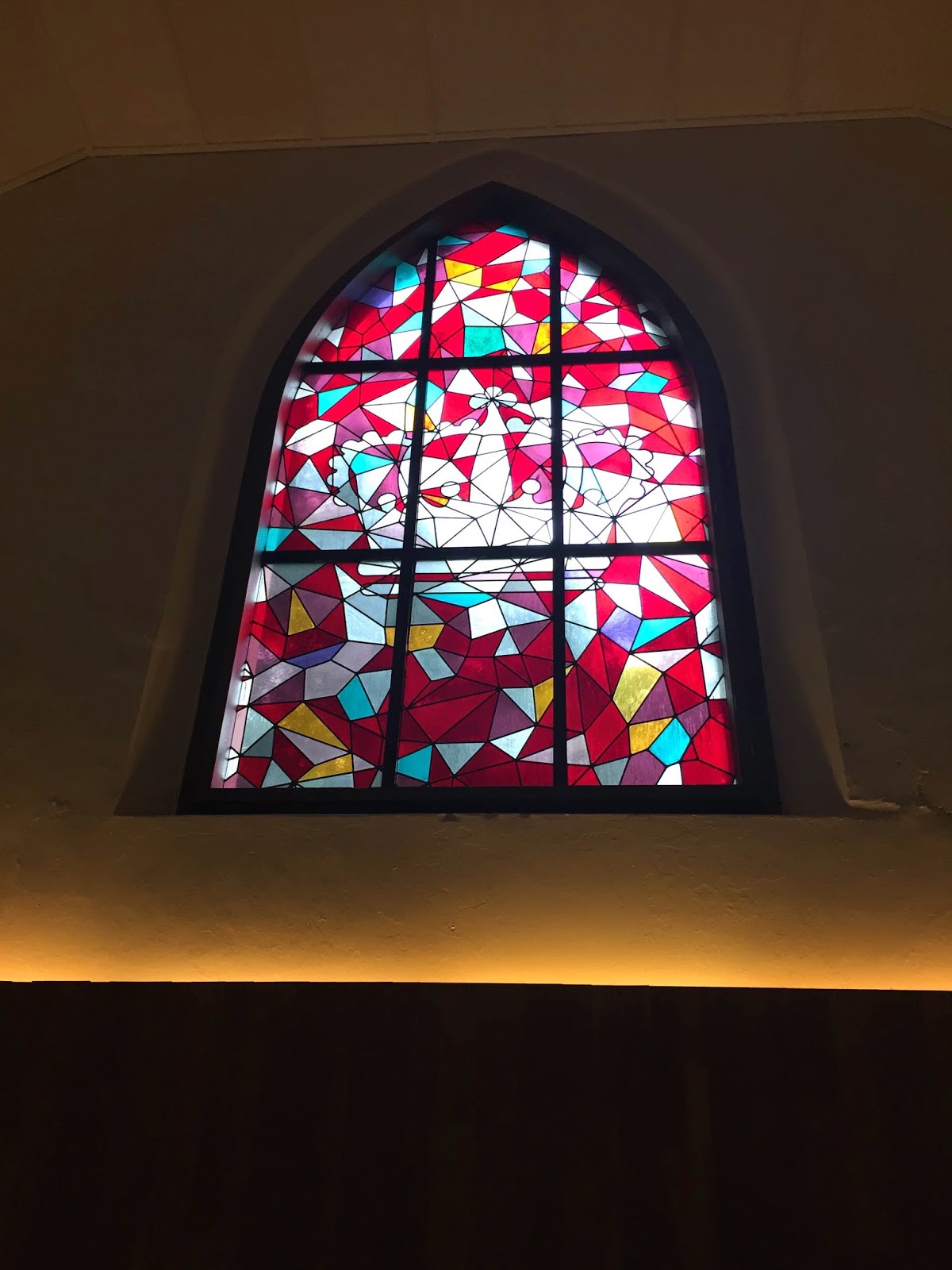 We decided to have the 3 course Christmas lunch menu and some Red Wine to accompany it. The decisions were made and we sat back, relaxed and waited for our Appetisers.

The Duck Breast was nicely cured with a slight smokiness to it. The Endives and Treviso Radicchio had their characteristic bitter taste whilst the candied Walnuts and Oranges added the sweetness to the dish. In isolation; each ingredient wasn't too special on its own but when combined into one mouthful on the Fork, the flavours melded well together creating a smokey, bitter sweet taste sensation for the taste buds. It was similar to a dark Chocolate scenario, but in a savoury context. The dish had been very well thought out and designed to be a perfect partnership. The freshness of the ingredients played a big role, with the rougher meat texture of the Duck adding a bit more character to the crispiness of the vegetables, the crunch of the Walnuts and the soft sweetness of the Oranges. The colour combination was great too from the dark Purple to the bright Orange. This was a very good start to our meal. 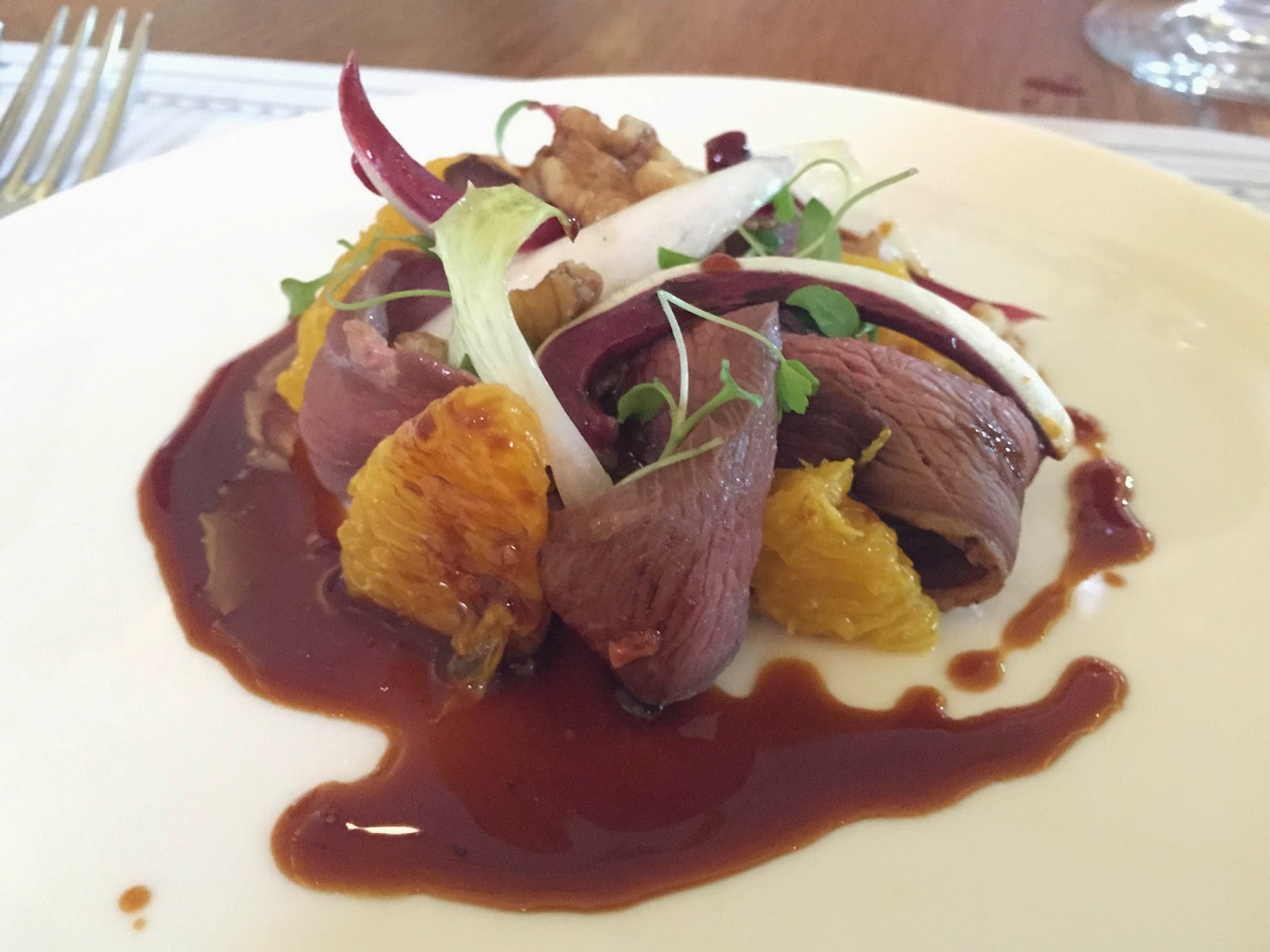 The second Appetiser was the Foie Gras Parfait with Fried Potatoes and pickled Vegetables.

When this arrived, it amused me a lot. It looked like Potato Chips had been stuck into my Parfait.

The Foie Gras Parfait was smooth, light, creamy and just like a perfectly made Mousse. It was enjoyable to spread it onto a Potato Chip to eat rather than the usual Bread. I wish I had more Chips though.

The Vegetables were pickled nicely, not too overwhelming that it made you pull faces :) They also went well with the Parfait. It was also good to get a variety of pickled Vegetables; not just the usual Carrots or Radishes. It was great being able to experiment a bit with the Parfait and how it tasted with the Pickle, Onion or Parsnip. Both Appetisers set the stage really nicely for the Main course. Speaking of which; onwards to our Mains.

The first Main was the Mushroom and Truffle Ravioli, with Savoy Cabbage and Shitake Miso Broth.

The Ravioli Pasta parcels were well cooked and al dente to the bite. The filling of chopped up Mushrooms was very fragrant with the smell and taste of Truffle. We did wish that there was more of the tasty Ravioli in the dish though as it felt more like an Appetiser.

There was a generous serving of Shitake Mushrooms and Savoy Cabbage on top of the Ravioli and it was all surrounded by the delicious subtle taste of the Miso Broth. The Broth was hearty and thick so that it clung to the Ravioli. 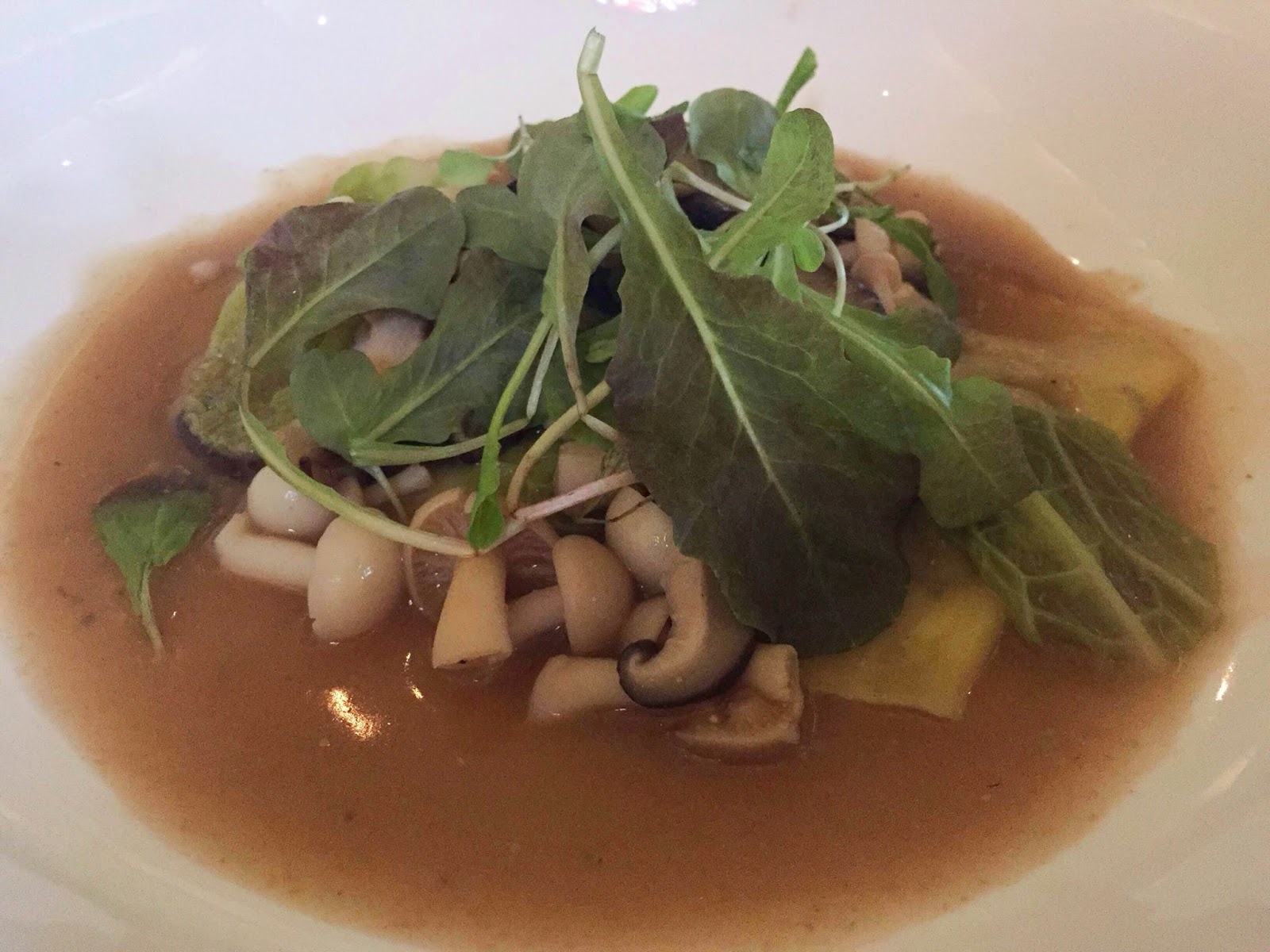 Our second Main was the 365 day Grain-fed U.S Beef Bolar Blade. This was served with a Jus made with Madeira, Buttermilk puréed Potatoes, sautéed Chard, Mushrooms and Truffle.

This was a very generous serve of Bolar Blade that appears to have been pot roasted. It was amazingly tender and retained a lot of moisture with a pleasing hint of pink. The Blade had also been seared before being pot roasted to seal in the flavour. The Jus was made by adding the Madeira and is great for dipping the Beef into for some extra flavour. This was melt in your mouth stuff.
The puréed Potato was wonderfully smooth and the combination of sautéed Chard, Mushrooms and Truffle made an aromatic side for the dish. 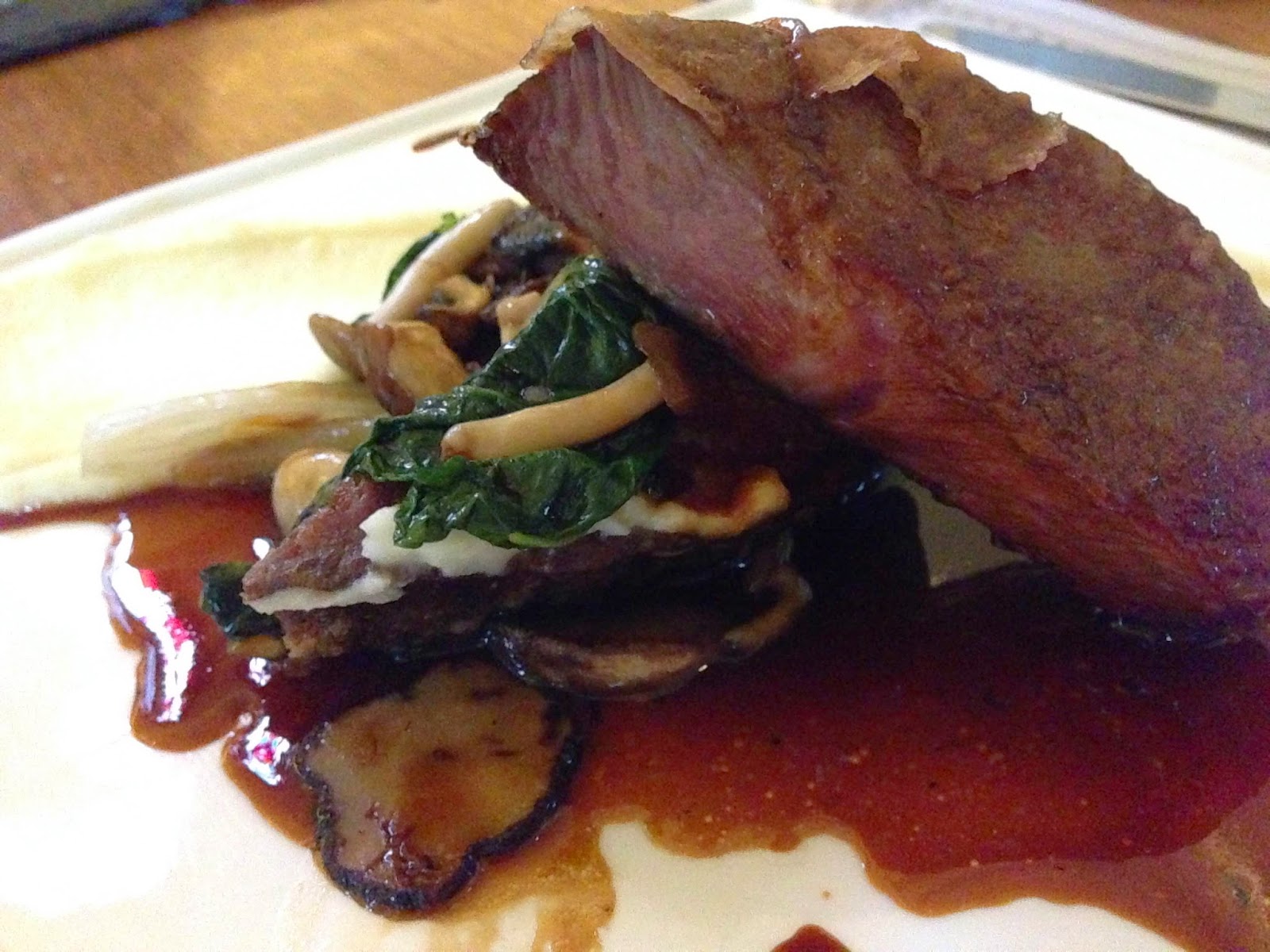 Now a meal; especially on one's Friday off, isn't complete without Dessert. There is always room for Dessert :)

The decisions were the Soufflé and the Pudding.

The Soufflé was a Chestnut one served with Vanilla Ice Cream.

When the Soufflé arrived, you could tell that it was soft and fluffy. Whole Chestnuts were nestled in the middle of the Soufflé goodness. The Soufflé wasn't too sweet and the Ice Cream was a nice cooling sensation on the taste buds against the warmth of the Soufflé. This was comfort food. 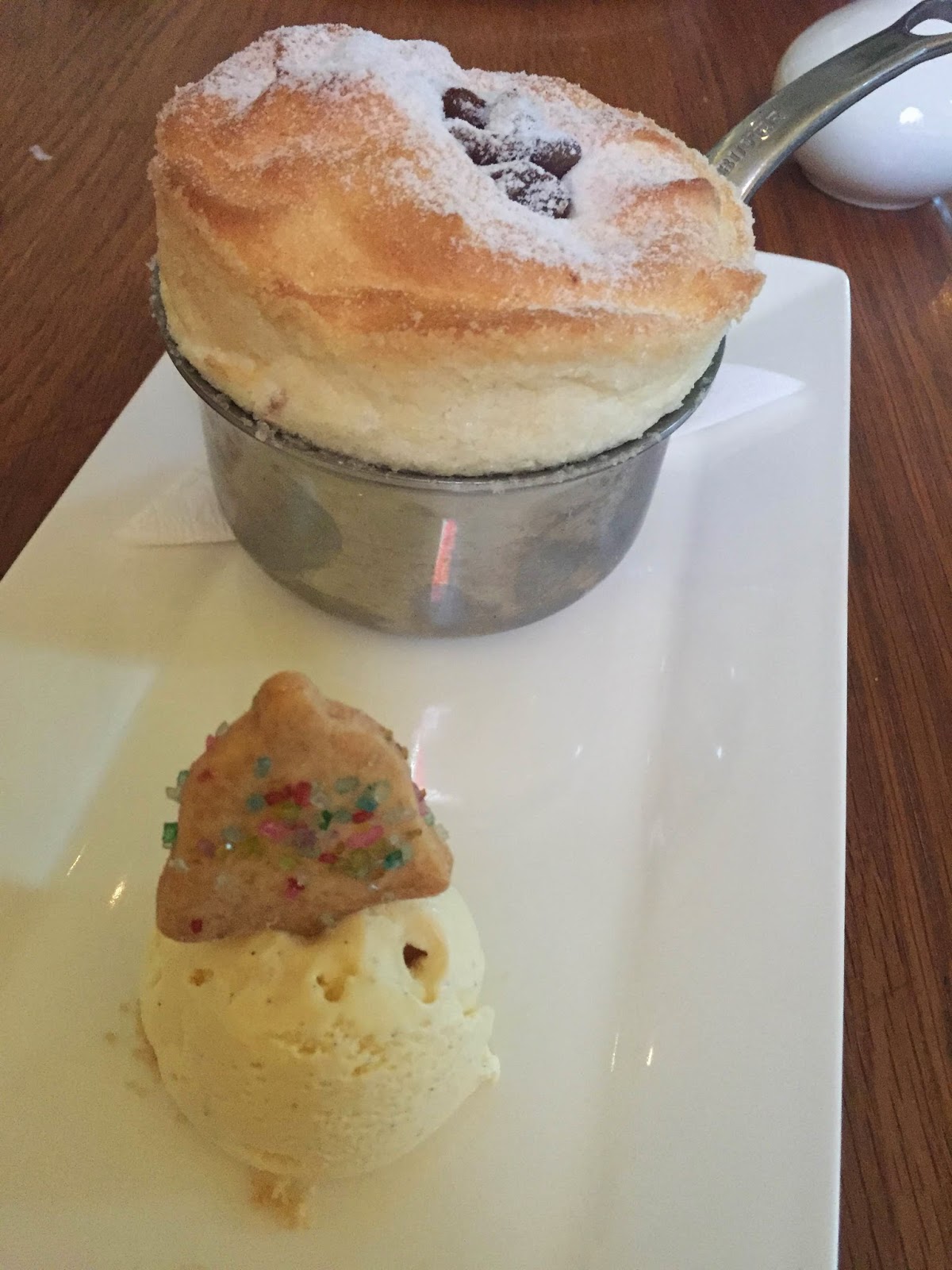 The Pudding was a Prune one served with Cheese Sorbet, Roasted Pear and Madagascar Vanilla.

The Prune Pudding was the highlight here; soft, moist and served warm so that steam rose up with every spoonful. The Prunes had a nice sweetness to bring out that Dessert feeling and went well with the Vanilla. The Pears were okay. 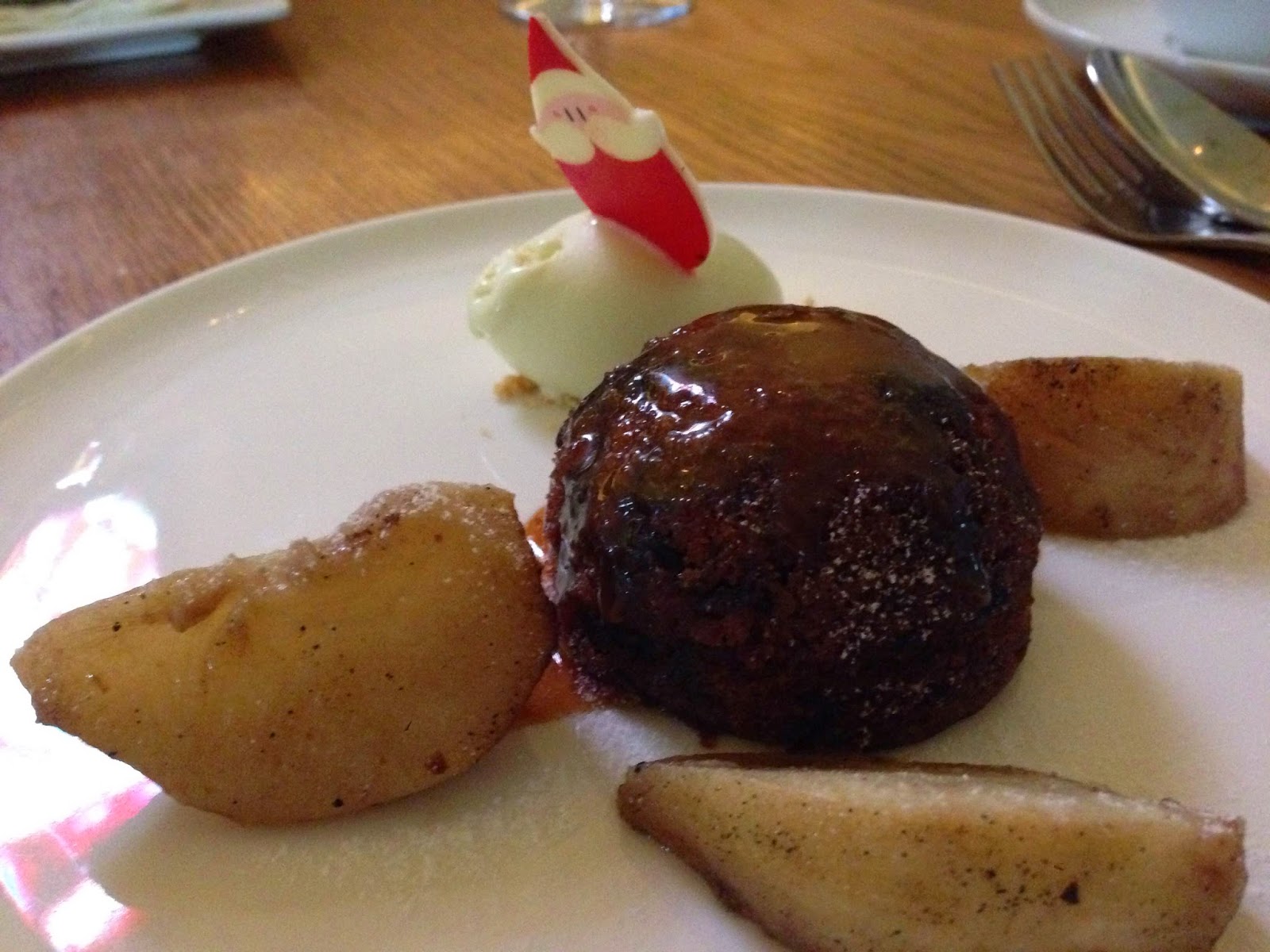 And so a great lunch came to an end and was rounded off with a Flat White and Cappuccino. The Coffee isn't too bad at The White Rabbit too.

All in all it was a fantastic way to spend a Friday off.

The White Rabbit Christmas menu is a real treat in really nice surroundings. It is popular as there is quite a crowd for lunch. One thing to note is that it is a Chapel so has a really high ceiling. If it is a rainy day, a light Jacket or Cardigan is ideal as it can get a bit cold in the Restaurant.

The White Rabbit Christmas menu is available until the 31st of December 2014; weekdays only, except on the 25th.

We opted for 3 courses at $48++ per person. There is also 4 courses at $55++ and this includes their signature Soup of Chestnut Velouté, Duck Confit and pickled Celeriac. As you can see below; there are a few choices to be made for each of your courses. 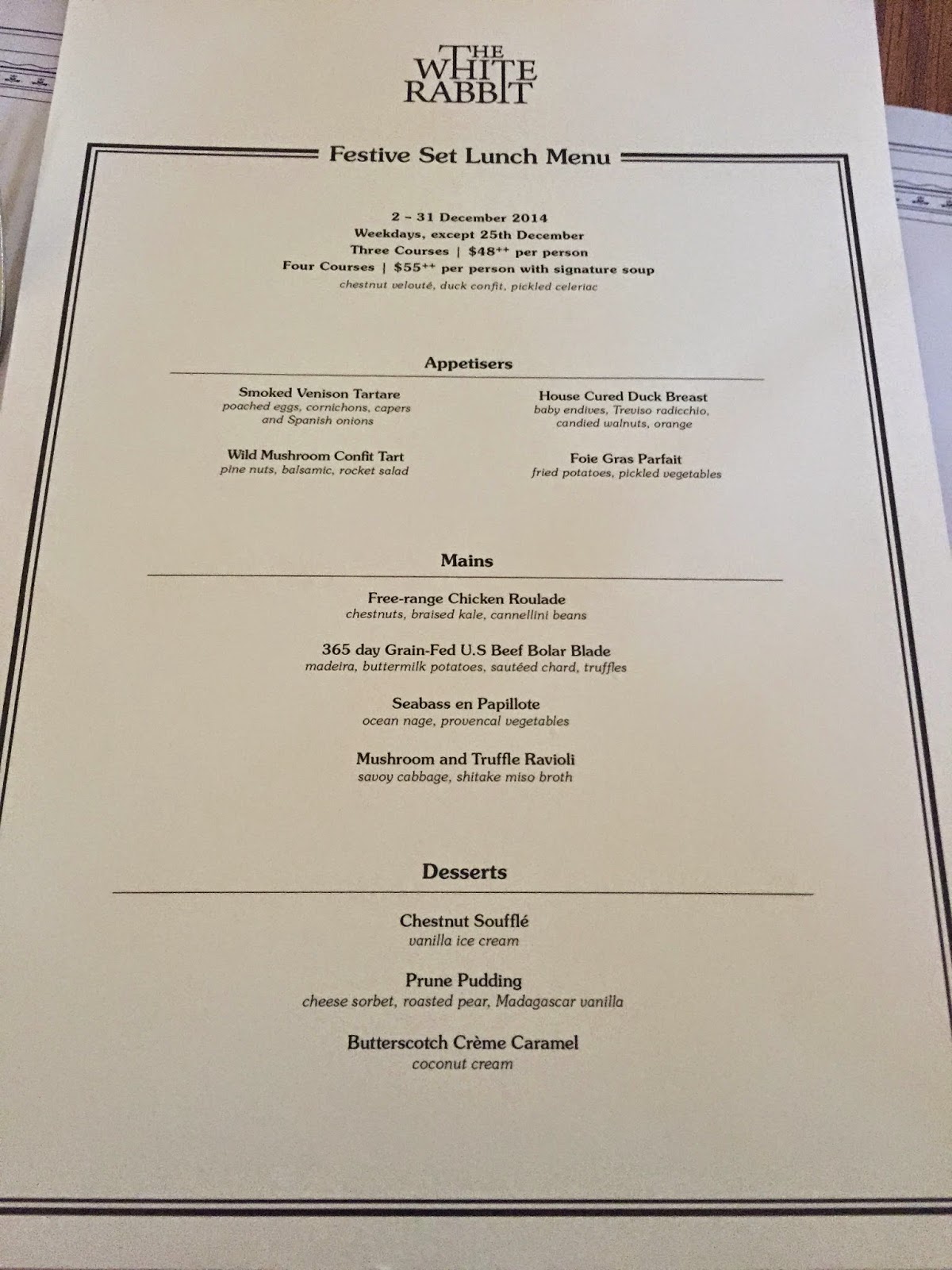 If you still haven't made any plans over the Christmas period, check out The White Rabbit. They have great menus over the holiday period including a buffet.

We are definitely looking forward to trying their regular menu at some stage too.

Have you tried The White Rabbit yet? What are your plans for Christmas?