For some of us, the thought of fasting from dawn until dusk sounds difficult and challenging.  For our Muslim friends however, this is done for a whole month during the period that is called Ramadan.

During Ramadan, Muslims devote their time to worship, good deeds and abstinence from food and drink during the day (Yes; in case you thought you read wrong; for an entire month).  To my surprise I also learnt it wasn't just food and drink but it would mean that even activities such as smoking and sex would go through a fasting period during Ramadan.  This is believed to purify one's body and soul and to bring a higher level of closeness to your beliefs.

When the sun sets, the fast is broken and families and friends gather for their meals and celebrations.  The area of Geylang Serai and Kampong Glam in Singapore becomes alive during Ramadan with bright festive lights, music, performances and bazaars selling wonderfully bright wares, clothing and food.  The food is one of the major highlights too from savory to sweet.  It is a perfect time to sample amazing Malay food.


After a month of devotion comes a long awaited celebration; Hari Raya!  The fasting finishes and it becomes an amazing month of feasting and sharing the company of family and friends. 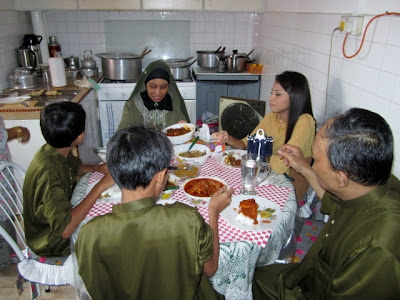 We were most honoured to be invited to a Hari Raya celebration this year and to share in the festivities with our good friend's family.  We were most excited about this and even jumped onto Google to find tips on what customs to observe and a glimpse into what to expect.  Of course we quickly picked up on the phrase "Selmat Hari Raya" (Happy Hari Raya) and also got a few tips on what to not wear.  For guys it was pretty straight forward; no shorts.  For the gals; no over exposure of skin so skimpy skirts or low cut tops were a no no.

When we arrived at our friend's home we could tell some tasty goodies were cooking even though we were only just outside the front door!  It was easy to tell we had found the right flat.  The greetings started and we wrapped our foreign tongues around the new Malay words.  Smiles and nods indicated that we were saying it well enough to be understood which is quite an achievement :)

Throughout the day we were treated to wonderfully colourful Malay outfits.  We learnt that each family that came to visit had a colour theme that they followed for this year's Hari Raya celebration.  It was a parade of Rainbows as family after family we essentially colour coded and named.  As the day carried on when we didn't remember a person's name we simply said something like "Pink Uncle" and we all knew who we were talking about.  It was also interesting to learn that the colour theme was decided by the entire family so it showed a great sense of unity in the decision making process as well as in the wearing of the same colour on the day.  We were treated to wonderful costumes by the Black, Red, Green, Yellow, Pink, Purple, White, Blue families.  There were probably more but we lost count as so many people came to visit.


With the warmth of so many visitors the flat can get quite crowded but it was great to be amongst it all and have a little chat here and there.  When there weren't enough chairs we would simply sit on the floor.

Then of course there is the food.  Even before the main feasting dishes were offered for "Makan" (Eat/Eating) we saw that the coffee table in the lounge was laden with snacks!  There were the more classical/traditional Pineapple tarts and Almond biscuits through to the more contemporary Chocolate coated goodies.  These weren't your normal snacks though as they were just as colourful as the outfits we saw during the day.

The main attraction was of course the feasting dishes, and boy they were spectacular.  We were treated to a taste fest of wonderful flavours; all with a gravy so that it can be spooned on top of Rice Cakes so that the gravy soaks in for the ultimate indulgence.

There was Chicken Korma, Malay style.  It was less thick than it's Indian counterpart and not a bright yellow. The chicken was perfect, practically falling off the bone and even the breat meat was moist.


Beef Rendang was also on the menu.  In this dish, the beef is cooked in the spicy gravy until it becomes dry so that the beef is essentially absorbing the gravy it is cooked into.  The result is a beef dish that is bursting with flavour and a rich thick brown gravy.  This was soooooo good. 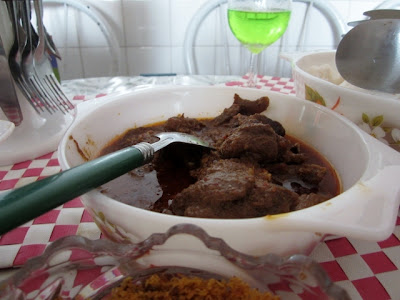 A Beef and Prawn mixed dish was also served.  This looked like it was cooked in a similar way to the Rendang but had a bit more kick to it as it had the distinct redness of fresh chillies in it. 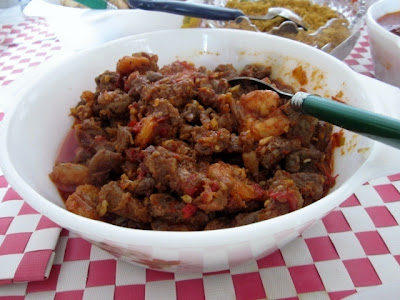 Last; but not least, was the most amazing dish of all.  We would tell it was the most popular because the pot it was cooked in was significantly larger than the pots of the other dishes.  It was a Satay Chicken dish with a beautiful rich orange and fiery redness to it.  The Satay sauce was a sensation with a perfect sweetness to it and the satisfying chunks of ground up peanuts.  Again the Chicken was falling off the bone. 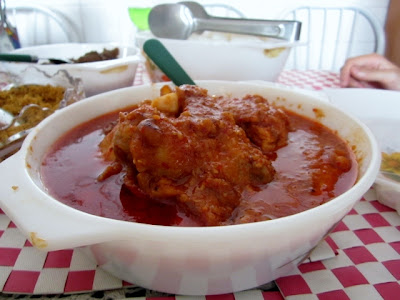 All the sauces were amazing scooped over Rice Cakes and then topped off with a condiment of toasted finely grated Coconut.  (Whew, practically salivating while I'm writing this......) 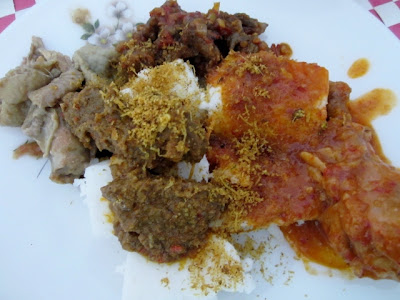 It was truly a feast and one had to have a break after one round and then go back for seconds later!  I've never heard the word Makan so many times; you're almost expected to eat all the time :)  At the dining table it was Makan, after you finished it was time to digest in the lounge whilst having another round of Makan through the snacks on the coffee table.

We were truly privileged to be invited to join in the festivities of Hari Raya and share in the feasting.  It was heart warming to meet members of the family and really feel the togetherness of Hari Raya.  The respect to members of the family was apparent and even upon leaving, some members would graciously thank the host and exchange words of kindness and ask for forgiveness.

We hope to experience Hari Raya again when it next comes round and already planning to make a visit to Geylang Serai, browse through the bazaar and find matching colour outfits to wear :)  The question is; what colour scheme should we choose..........?  :)

Ramadan is the month leading up to Hari Raya so ensure you catch the sights, sounds and food at Geylang Serai and Kampong Glam next year.

Hari Raya is a public holiday in Singapore and the date changes every year.
This year it was on the August 19th.  In 2013, it will be on Thursday 8th August.

Check it out next year :)