For those of us in Singapore; around this time of year, a familiar smell lingers around the air. You're almost certainly going to smell it before you see it, even from metres away. Soon you come to recognise it; as you round the corner, sitting amongst all the other fruits you'll spot the Durian. Hailed as the King of Fruits its hugely recognisable with its armour of spikes, smelly reputation and a yellowish custard banana like flesh that lies within its many chambers.

It's hard to tell whether the Durian is loved or loathed, for as many that say they love the fruit to bits, there is seemingly an equal number that wouldn't touch it with a 10 foot (or more) pole.

However, word has spread..... Apparently this season is the best season yet due to more favourable weather conditions or due to more rain in the neighbouring countries where the Durian is imported from. Facebook and Instagram accounts are also singing the praises of the Durian this season; so really, it had to be done. We just had to try it for ourselves.

After dinner one night; Durian was the dessert of choice. I can just imagine most of you cringing now, probably thinking Cake or Panna Cotta is a better choice. We opted to buy a Durian at "227 Katong Durian" out on East Coast Road. We heard somewhere that they're renowned for getting in darn good quality Durian and the owner knew what he was doing when selecting your pungent medieval weapon of a fruit for consumption. We were 100 metres away from the stand but could already smell it. Yup; the force was strong this season, and it was attracting many enthusiast. There was already a queue alongside the stall. 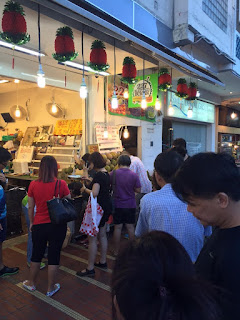 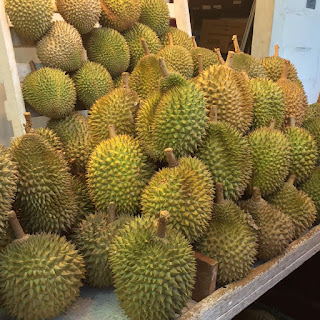 However, it didn't take long. Minutes later the owner had chosen out a Mao Shan Wang Durian for us, he skilfully hacked into it with his trusty knife, weighed it, charged us $34, and it was ready to eat at our roadside table. We weren't going to risk taking it home as it certainly doesn't fit into the "best" air freshener category. 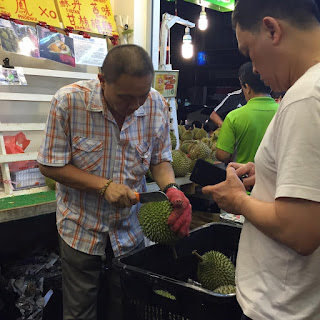 Sitting at the table; I pryed open the Durian, making sure not to cut my hands in the process. This fruit; beyond the smell, can be harzardous stuff. And behold; with a sudden strong whiff of Durian as the shell was opened, the wonderfully bright yellow fruit was revealed. The colour was amazing, bright, intense and kindly "sickly". We dug right into it pulling out a seed each. I love how there is a small membrane like coating around each piece. It gives a very nice texture and crispiness as you bite into it. Within is the super rich and creamy custard like flesh. As you bite, it is almost like eating mozzarella on a pizza since it can stretch into thin strands. The Durian was sweet and very decadent. The texture was amazingly smooth and we loved how it had that weird aroma. It reminded us of "strong paint". 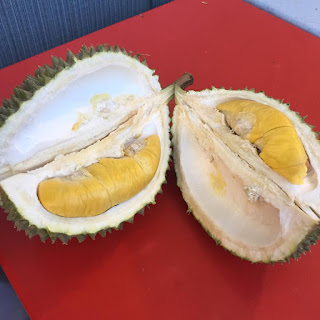 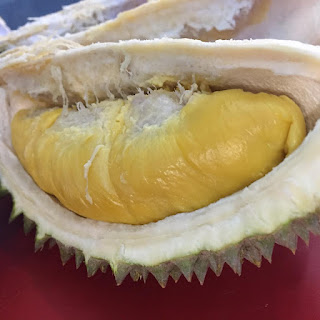 There was a total of 5 chambers so we racked up an impressive pile of seeds! 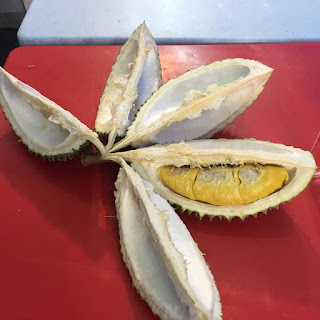 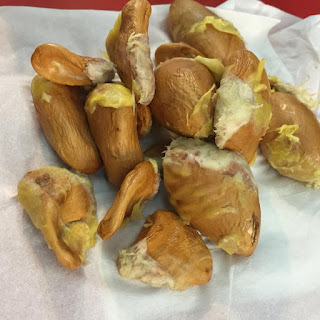 After a pretty big dessert of Durian, we must say that we agree with the majority that this year's Durian season is spot on. Whether it's at a bus stop or even in our condo complex, the smell of Durian lingers in the air as fans buy up big and indulge.

If you're a fan; get out there and try it out if you haven't already done so. Never tried? Now is an excellent time to try. Not a fan at all? Sorry; you'll have to endure the season for a few more weeks.

What are your experiences with Durian? Yea or Nay? :)