The following is a guest post by 'Canto Girl . . .

It was with a mixture of trepidation and anticipation that I accepted my friend E.’s invitation to be his plus-one at the media launch of Full of Crab, Singapore’s newest ‘seafood in a bag’ joint, Cajun in origin as I later found out.

The concept is simple, various types of seafood – mainly legs of crab, unshelled shrimp, crayfish – cooked in a garlic butter or Cajun or garlic butter AND Cajun… gravy (?) with corn on the cob and potatoes thrown in for good measure, wrapped in a large clear plastic bag and served on a communal table space where everyone digs in to get down and dirty.

My trepidation had more to do with my own ethno-culinary bias than anything else; Cantonese even wealthy ones rarely eat seafood on a regular basis as it’s thought to be bad for cholesterol levels, so if we do eat seafood it tends to be at restaurants where it’s cooked the traditional Cantonese way or the newer Singaporean style à la Roland Restaurant. Hence seafood and I have never had an hearty relationship, what more an entirely new style of cooking to me.

I’m not one to turn down free food and drink however, so I went along with an open mind and empty stomach; the latter turned out to be quite important. Bit of background on the place: commercial pilot Nigel started Full of Crab with the help of family and silent partners, and as an ACS boy he could count on lots of alumni support and patronage, E. being one of them! ACS (Anglo-Chinese School is one of Singapore’s oldest mission schools; it is a long-standing joke the whilst Raffles boys rule Singapore ACS ones own it, and full disclosure my own familial affiliations run deep). There’s even a tribute to ACS on the wooden ‘drawing’ wall, the opening lines of their school hymn, quite touching: 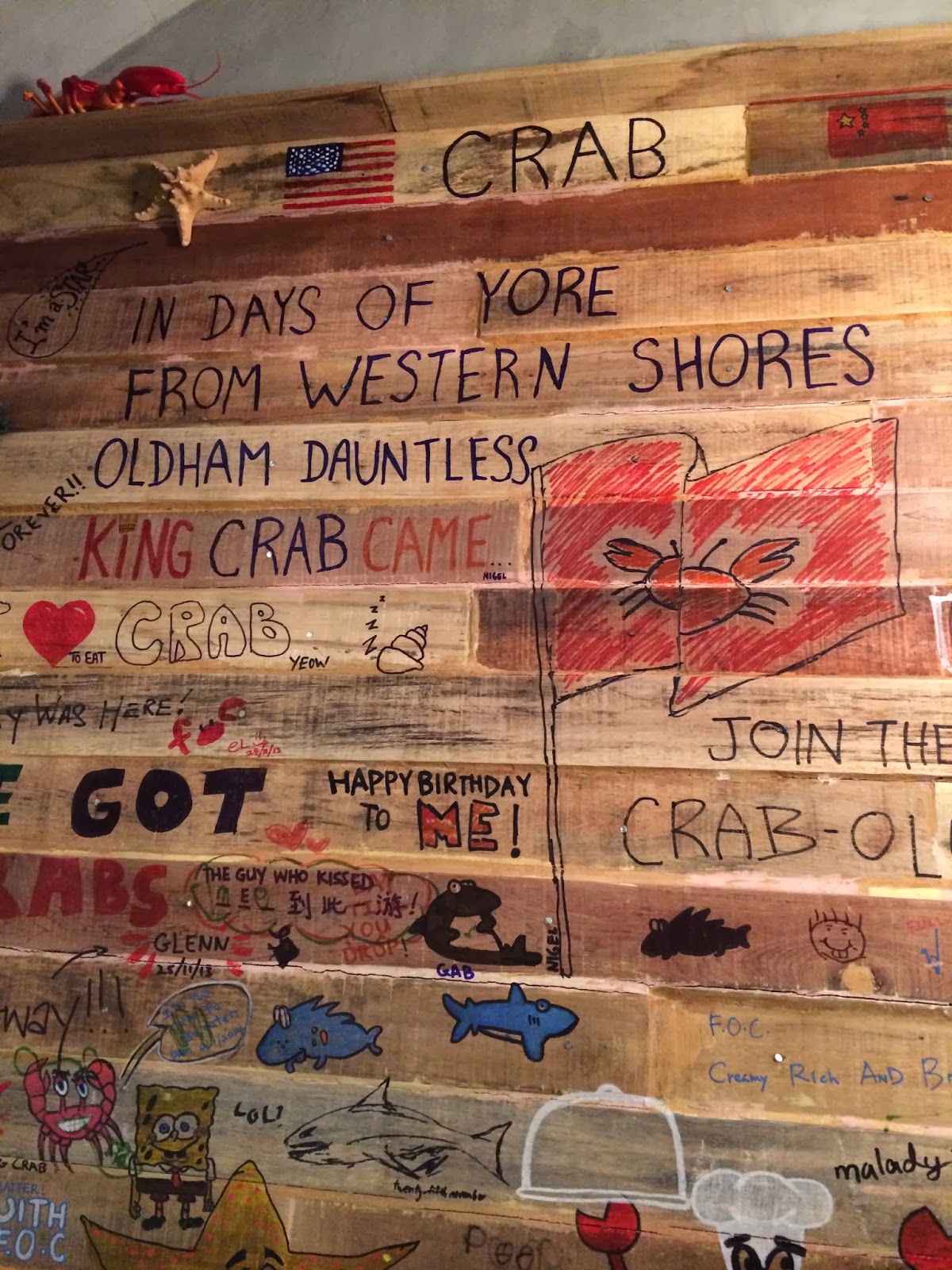 We had another ACS old boy, Chef Jeremy, he of Preparazzi fame and his wife join our table, which means that hopefully my opinion is fortified with his professional insight!

The décor is whimsical, almost homespun in its eclectic selection of wall hangings, built around the concept of a wooden boathouse. Along one stretch of wall are booths and along the other modular seating to accommodate larger groups. 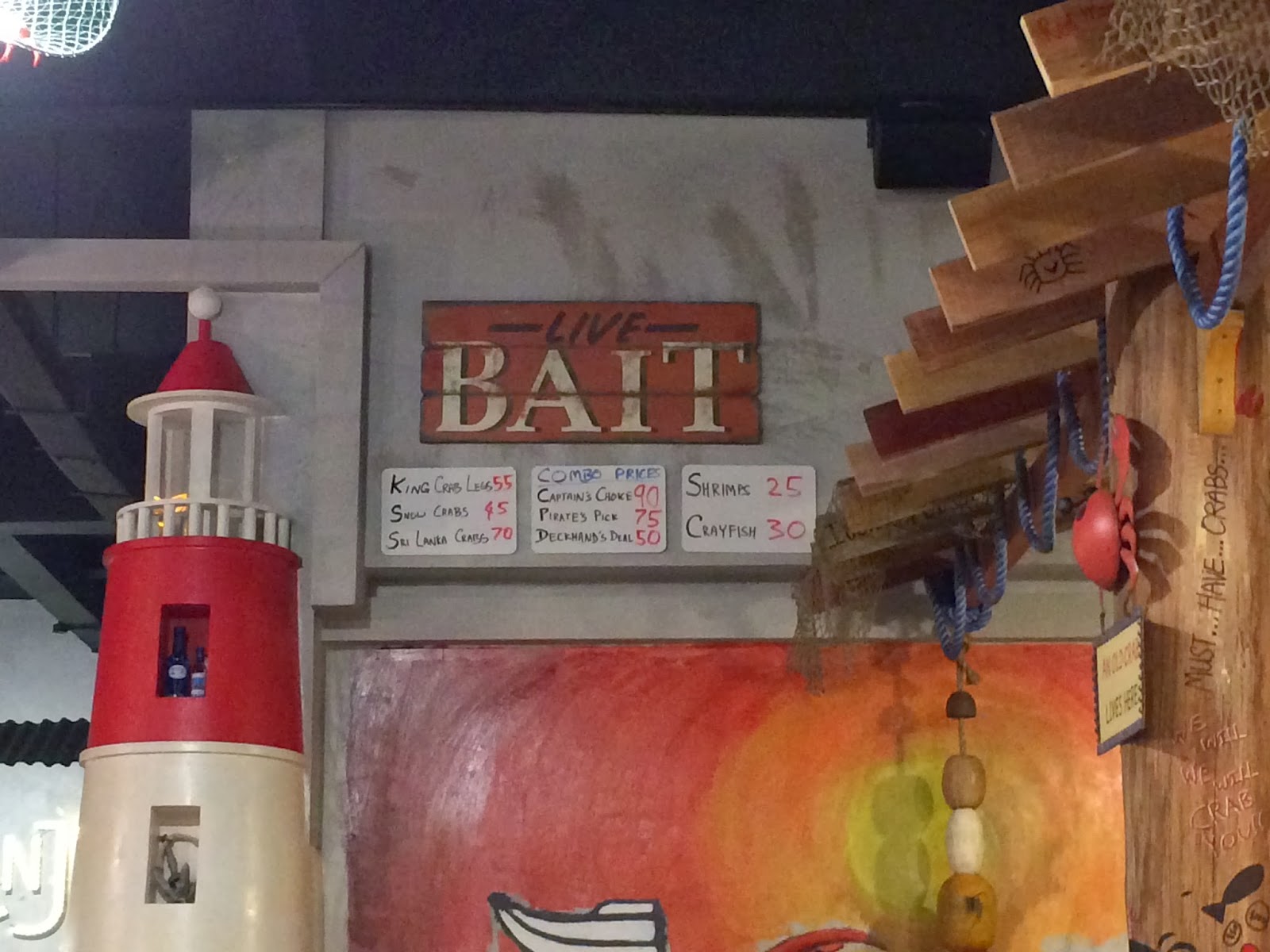 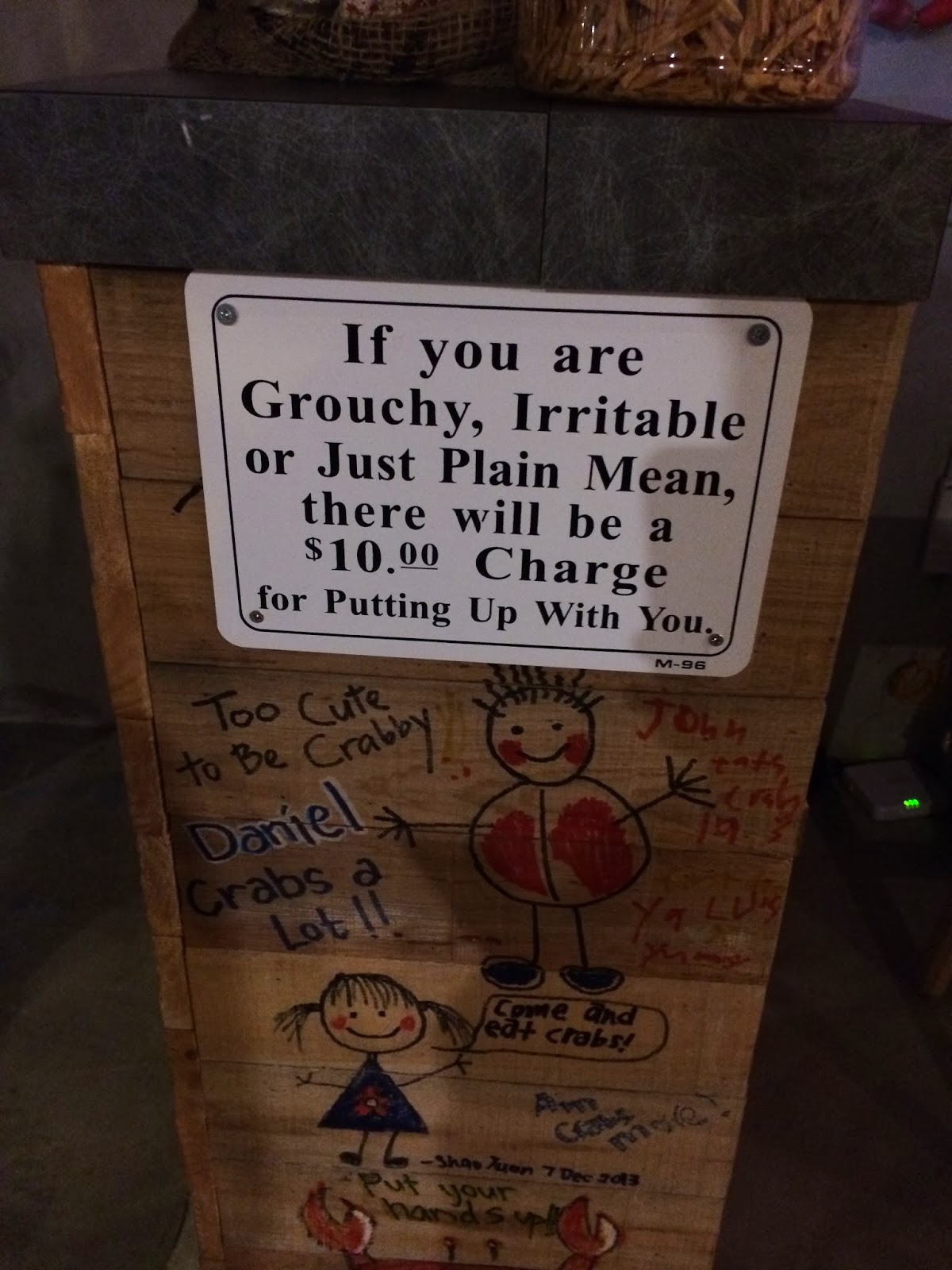 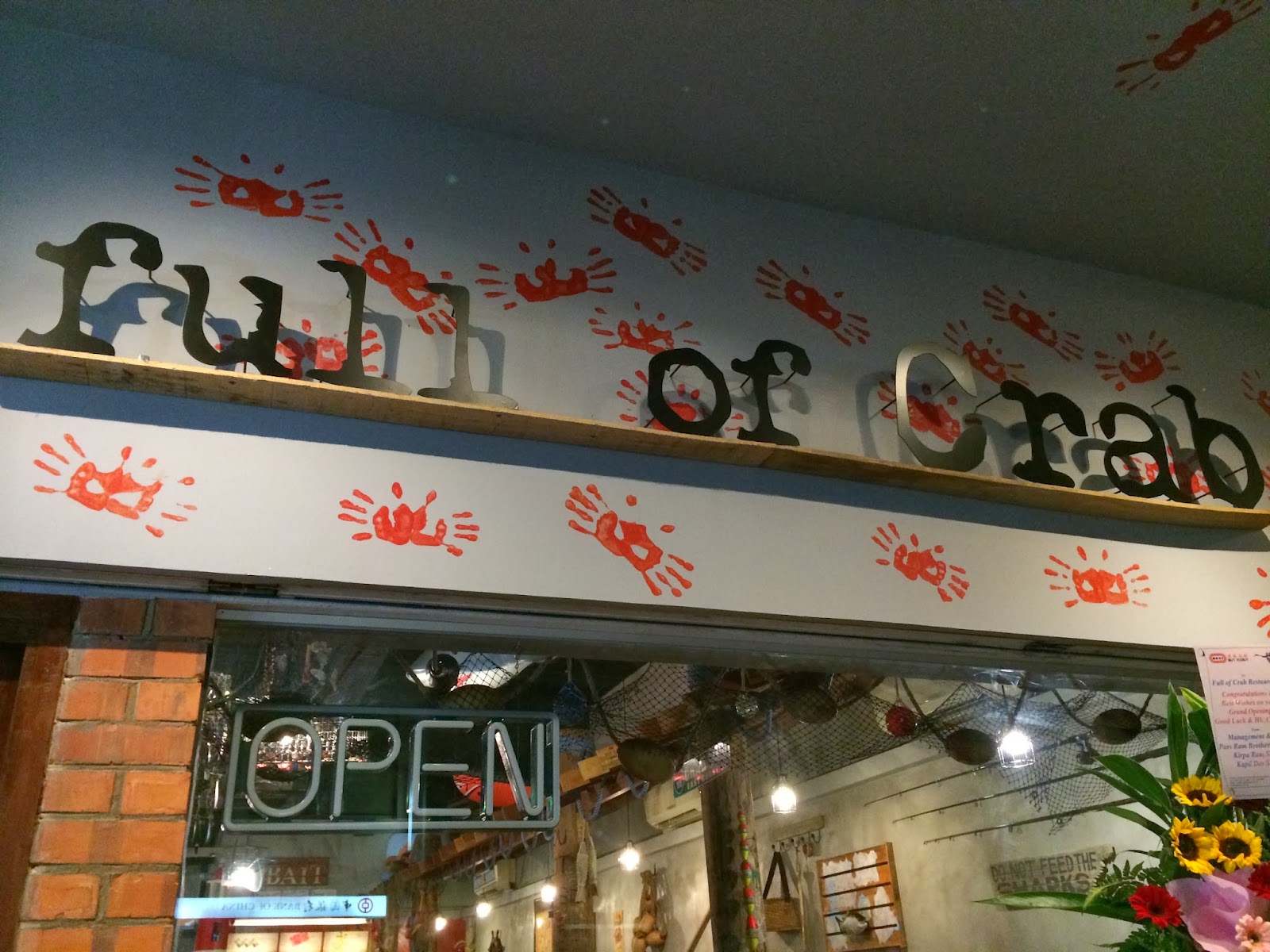 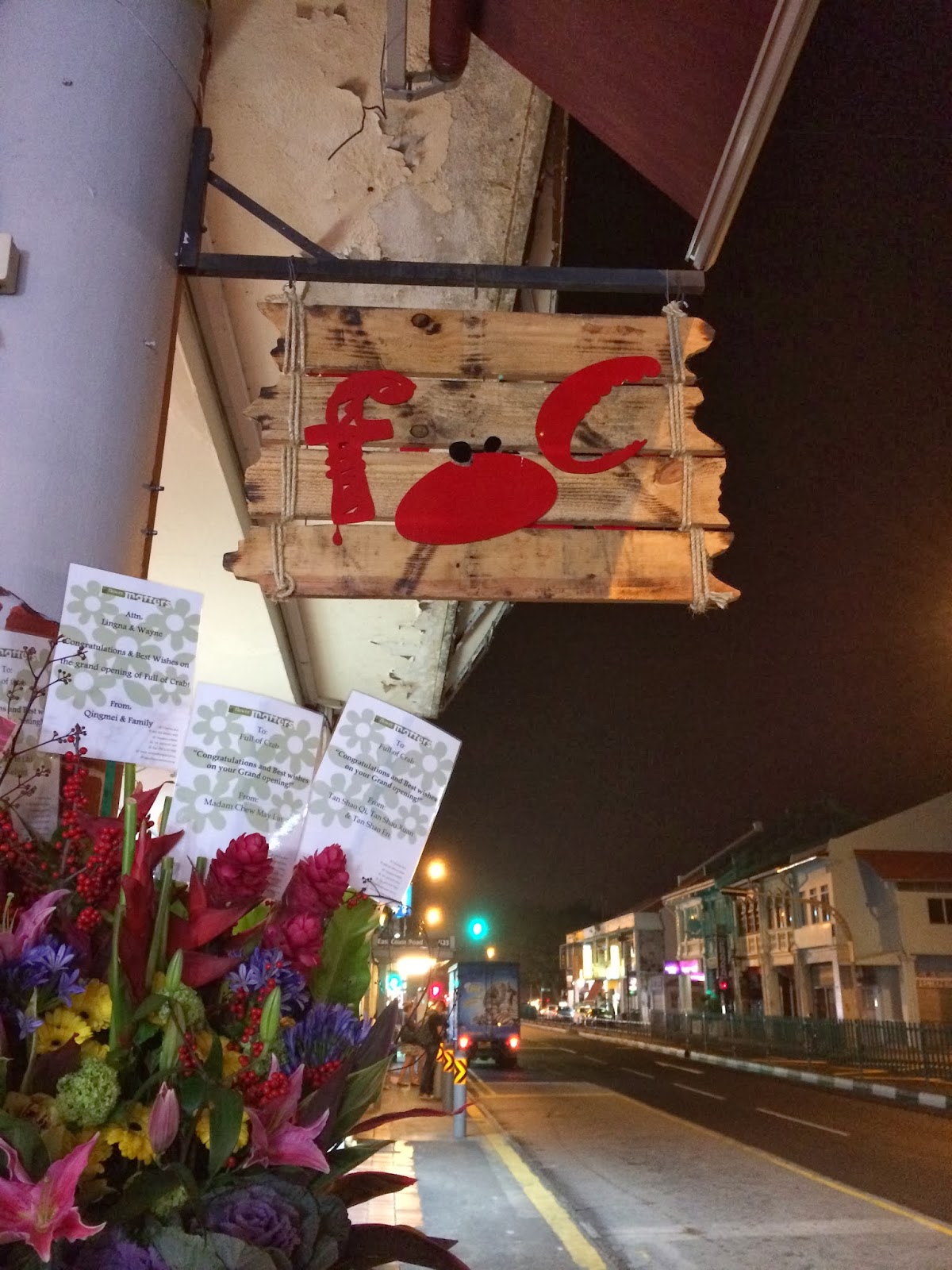 Now on to the important part, the food! To satiate our growing hunger they served us some Heineken (free flow, not complaining) and ‘Twiggy fries’ because they were really quite skinny. They were SCRUMPTIOUS. I’m not typically one for fries of any sort but I inhaled my serving. Just the perfect balance of crisp, salty, mildly spicy and addictive. 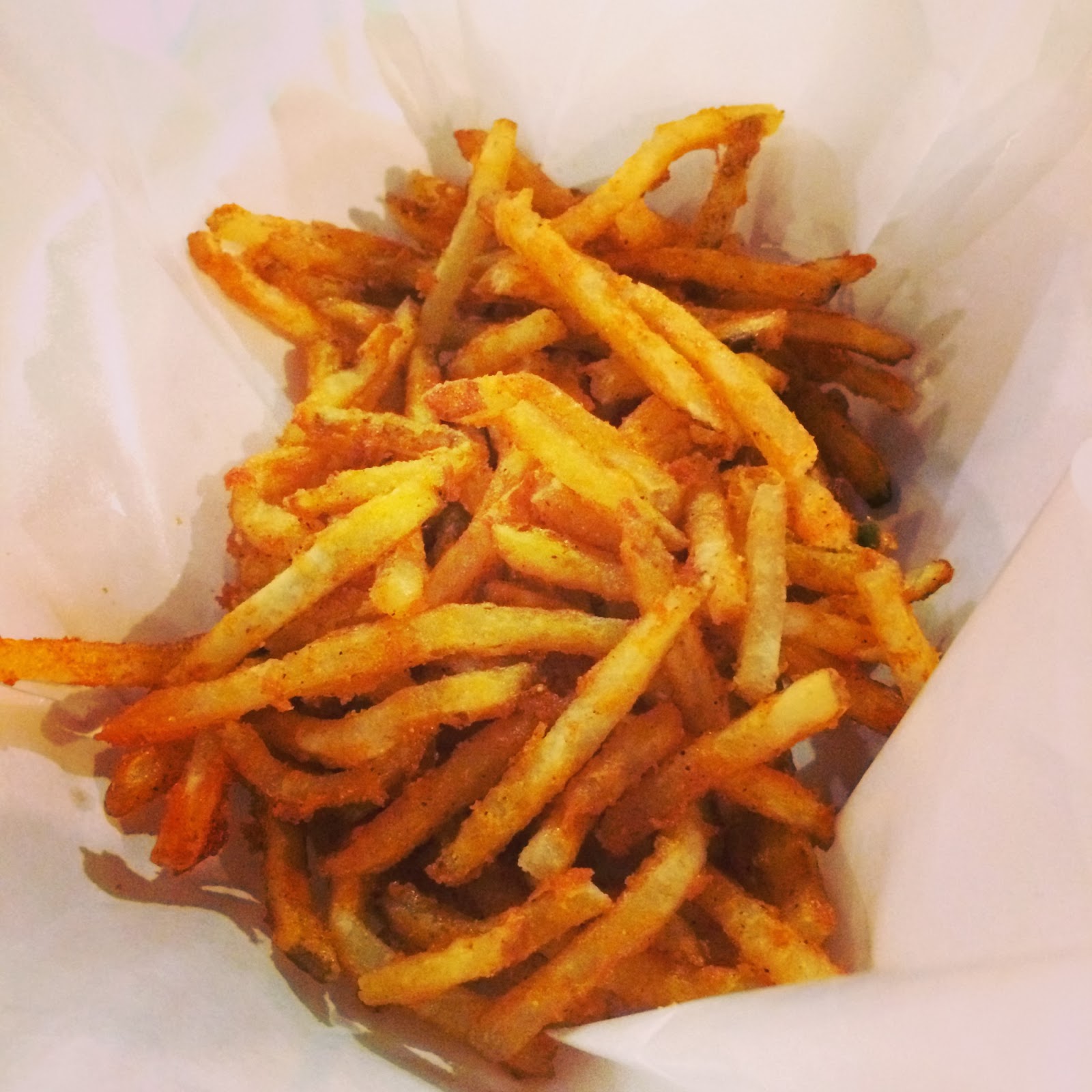 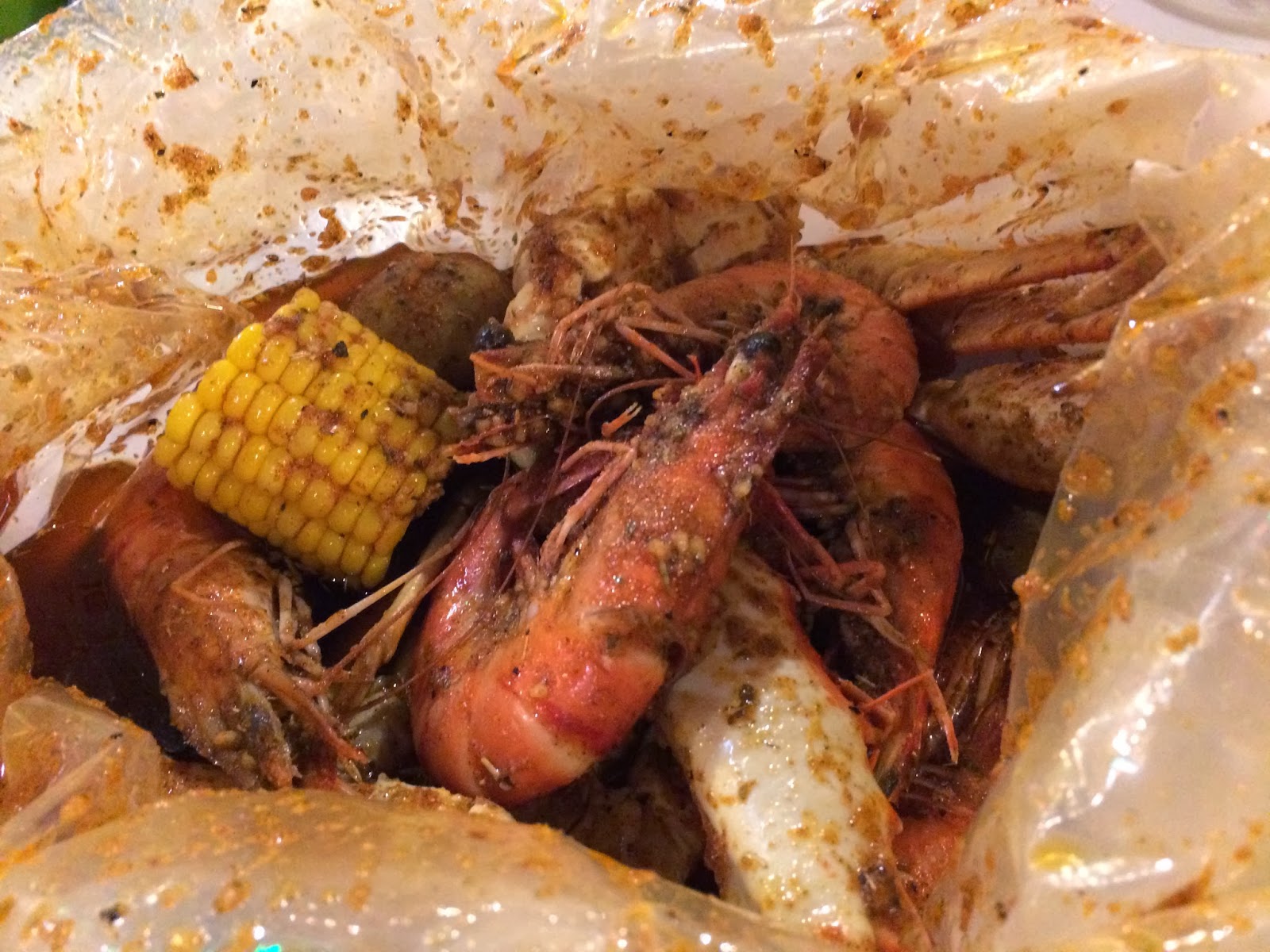 You get a bib, a crab cracker and a seafood pick; the rest is up to your hands and determination. Rings and watches are best removed as I found out later to my rue, and short sleeves are advised. 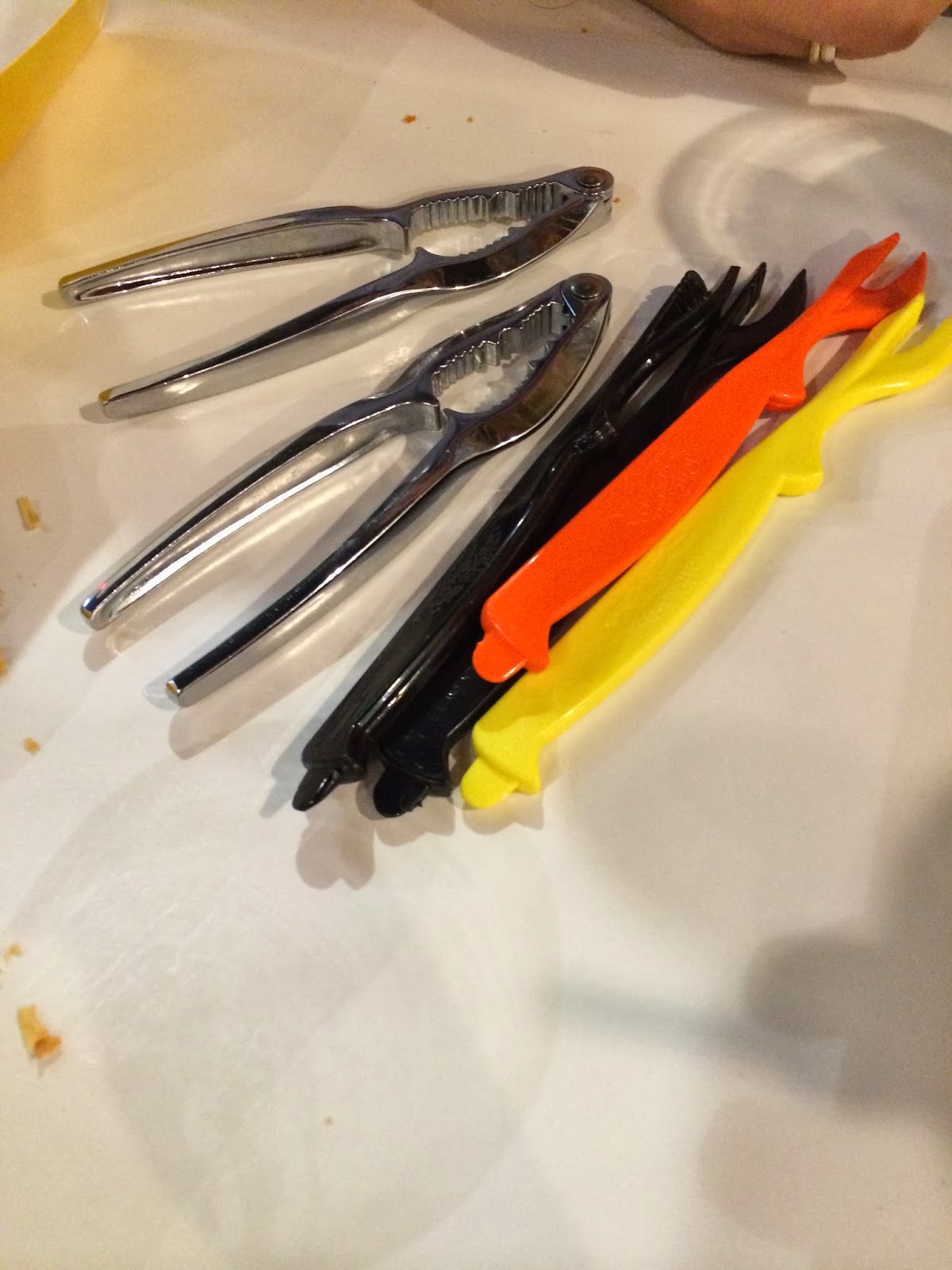 All of us guests were given the ‘Fully Loaded’ gravy, a garlic butter and Cajun mix, into which Jeremy proceeded to dunk a handful of sweet potato fries ‘to soak’. I followed suit. Long story short, the four of us proceeded to have a ridiculous amount of fun tearing apart our seafood and getting our hands downright filthy. 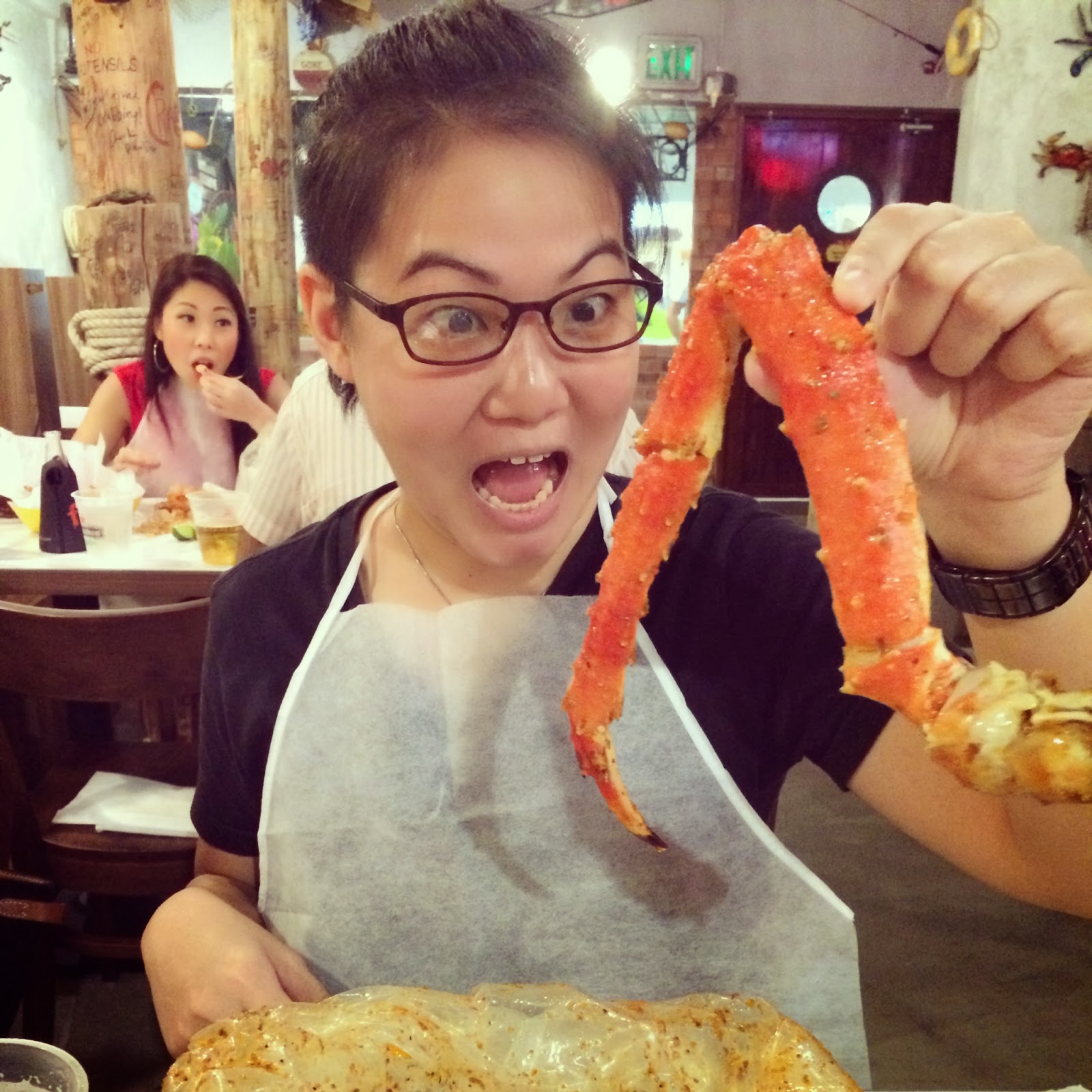 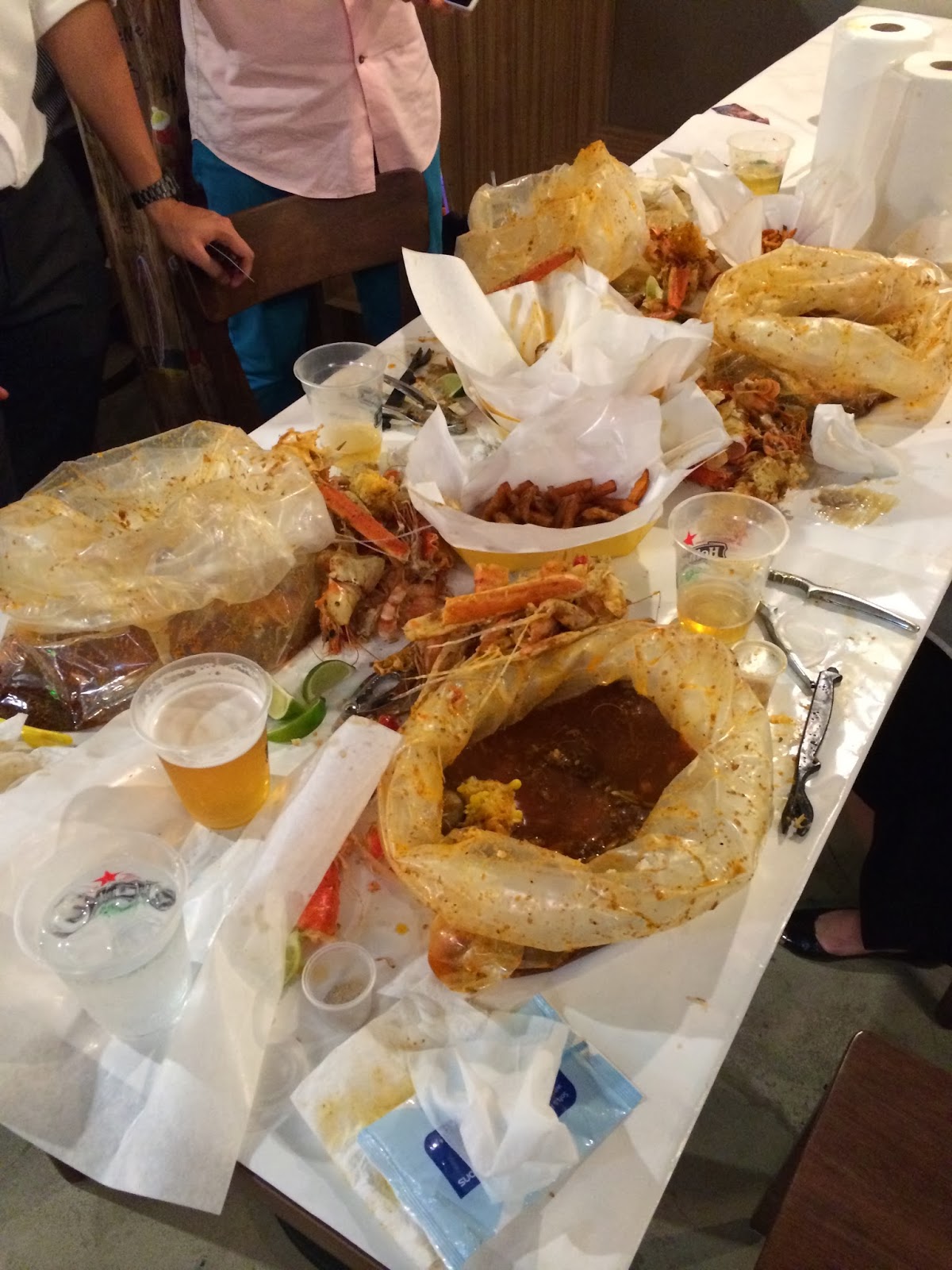 I was told the crab was of the Alaskan breed but from Australia, not that I’d be able to tell the difference. This was my favourite of the three crustaceans despite its prickly exterior that caused my fingers a bit of pain, but otherwise no gain as the saying goes! The flesh separated easily and came out in a long, smooth piece that I dipped into the calamansi-salt condiment provided. It was spectacular – sweet and firm. Other experiments involved placing a piece of meat on a hunk of baguette, topped with gravy-soaked fries. Heart attack on a bruschetta, if you will.

Had never tried this breed either, but I didn’t like it as much as the king crab. The flesh was a lot harder to separate from the shell and the texture reminded me of stingray, although very sweet I must say.

Prawns more likely, in British and local parlance, and of the giant tiger variety but you’re better off checking with the staff what exactly they were. Nevertheless they were quite tasty and I polished off the five or six I was given in very little time. After having been soaked in the Fully Loaded gravy, the head of the prawns are sweet as.

Cob of corn and taters. By the time I finished the seafood they were more of an afterthought, and I really wasn’t up to finishing them anyway.

Verdict: Travelling Hungryboy prefers this joint to Crab in Da Bag or Cajun Kings, and I tend to take his opinion seriously. Chef Jeremy thinks it’s great. I think I’d treat my parents to a birthday dinner here. And why not? The prices are fairly reasonable, understandably always listed ‘market price’, and the ambience is fun and homely. Leave elegance and clean hands behind, and you’re in for an evening full of crab. Visit them at 195 East Coast Road, Singapore 428900 (opposite Holy Family Church). 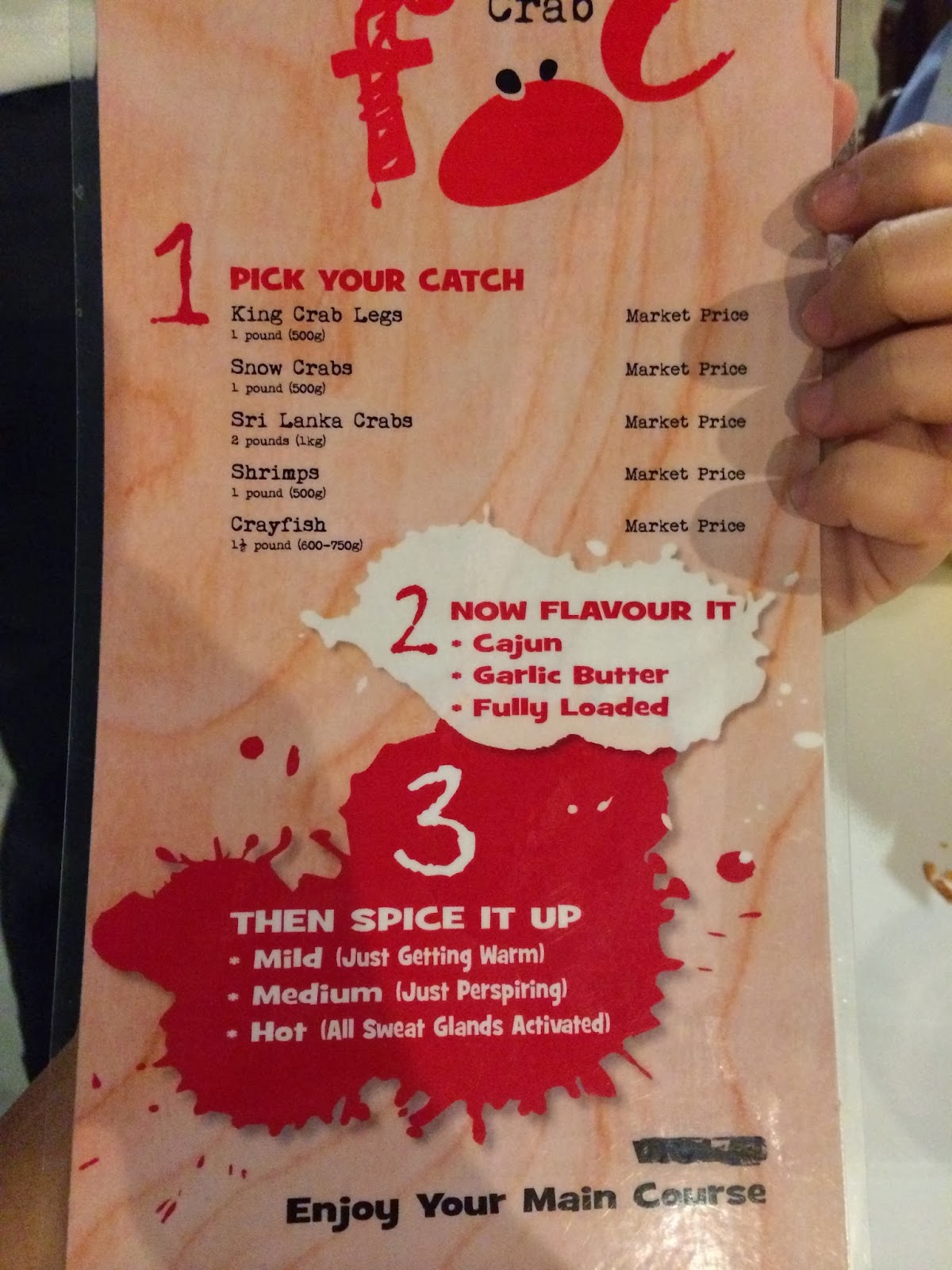 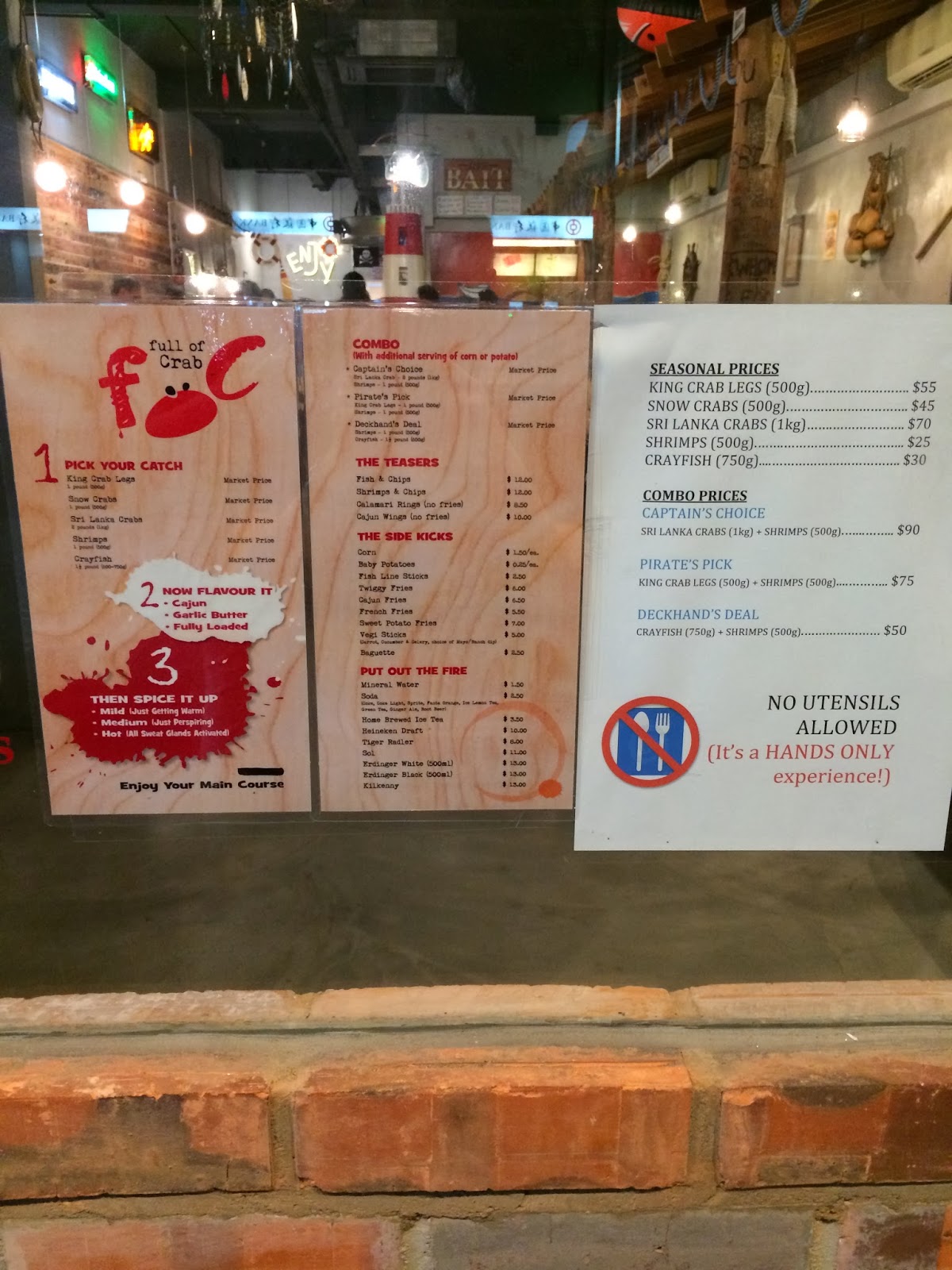 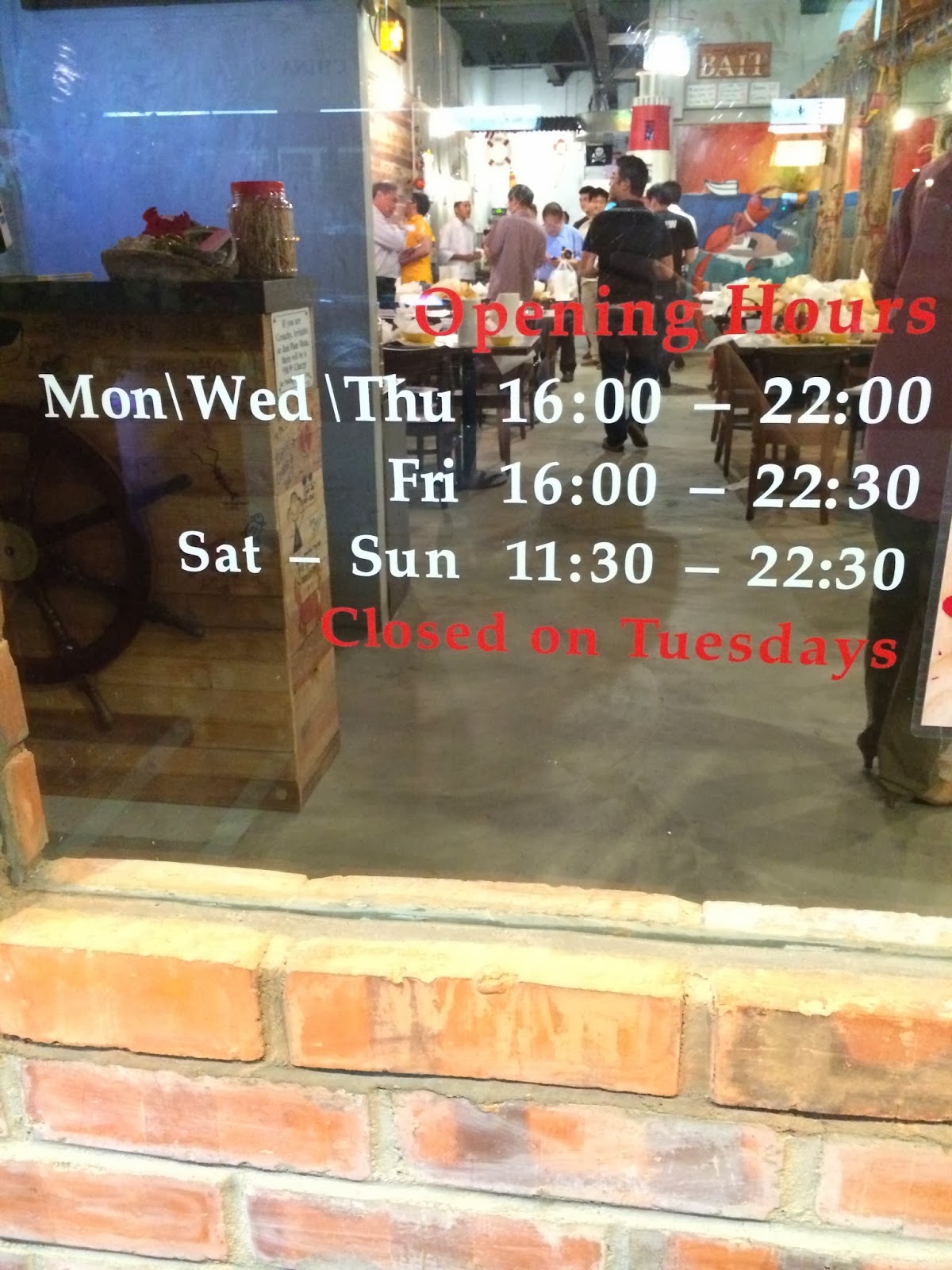 Disclaimer: This was written out of sincere appreciation for the food and service provided, and a willingness to support the ACS / MGS network in any way I can. 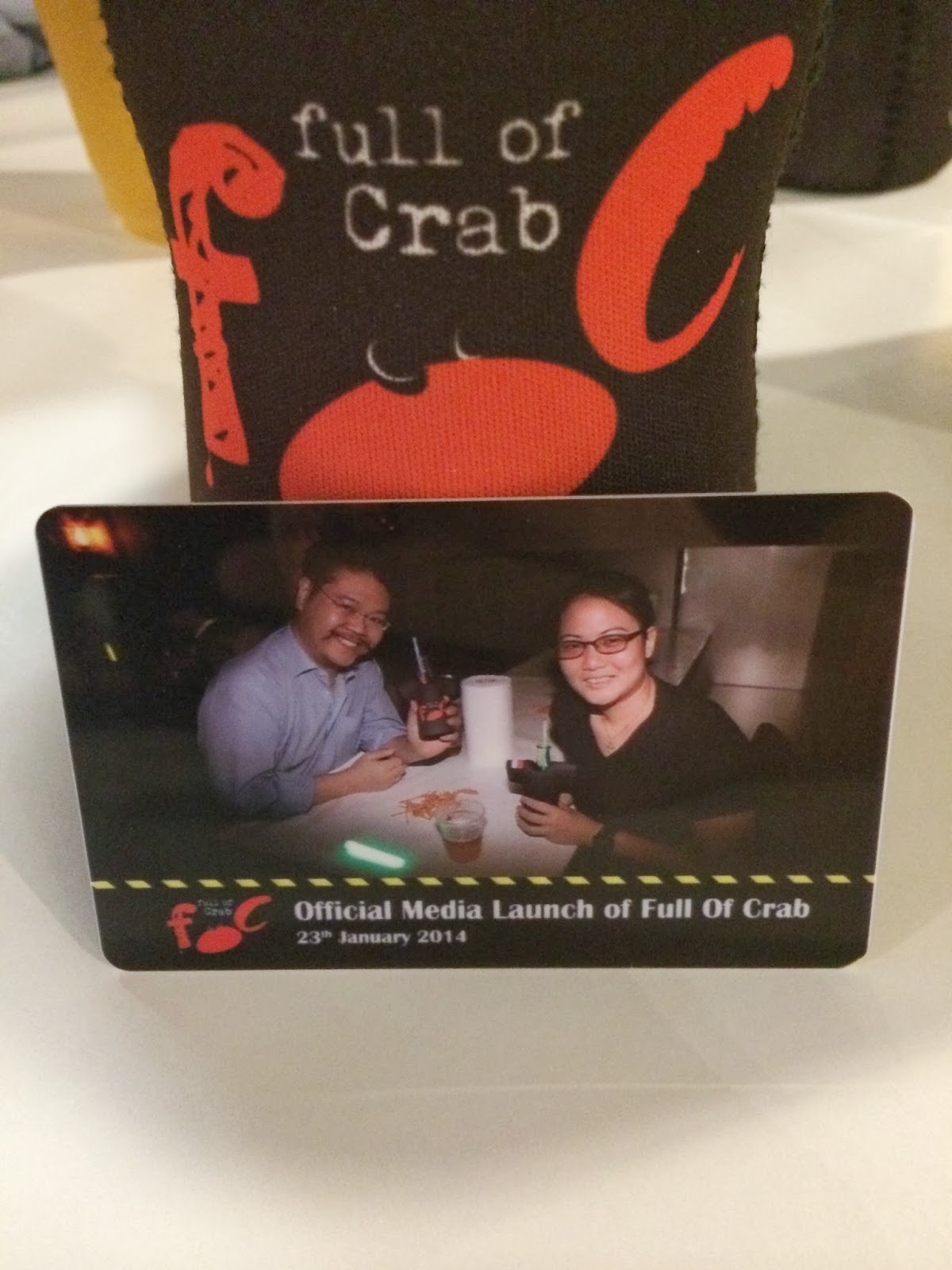