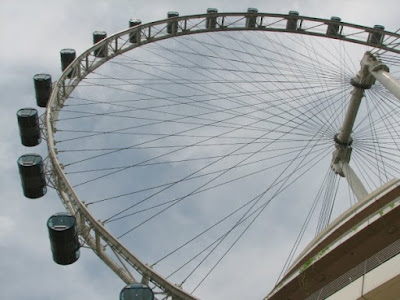 At a height of 165m, the Singapore Flyer is the world’s largest Giant Observation Wheel.
It held its groundbreaking ceremony in September 2005 and was launched in 2008.  It promises more than just a view, but a panorama that captures Marina Bay’s skyline with a glimpse of neighbouring Malaysia and Indonesia.
Featuring fixed capsules the size of a bus, the spectacular icon is capable of holding up to 784 passengers.  Each capsule has a 28-person capacity and each revolution takes approximately 30 minutes.
Giant Observation Wheels vs Ferris Wheels

There is a lot more to see and do around the Flyer.